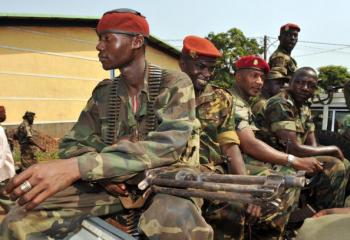 Armed military personnel of the junta are seen in Guinea on December 25, 2008. (SEYLLOU/AFP/Getty Images )
Africa

The death of Guinea’s dictator, President Lansana Conte, last Monday sparked a snap military coupe to break the quarter of a century stronghold over the country.

The new in power, military-run, National Council for Democracy and Development has been openly inviting the international community to meet, saying they only want to stamp out the widely recognized corruption the country has been plagued with.

However concerns poured out world wide with many not wanting the prospect of having to deal with a new military junta in the making.

Often having no regard for human rights, military dictatorships have rightly been increasingly shunned.

Although the previous civilian rulers of Guinea were far from perfect, they at least upheld some formalities of democracy, holding regular elections since 1993.

And while the new military rulers of Guinea say that elections will be held within 1 to 2 years, it is not the first time that promises have been made and broken by men in uniforms who end up doing anything to cling to power.

After all the late President Conte came to power in a military coupe in 1984.

So it is no surprise that the international community has been pushing for a shorter election timetable–the EU giving 3 months.

This will pose a challenge for a nation that has a poorly developed democracy –with most of the population only experiencing a dictatorial system. And any past election results being generally disputed and very likely “rigged”.

The emergence of military rule can be seen as a want for change by the people of Guinea, dissatisfied with poor wages, infrastructure and general mismanagement, as highlighted by several large scale strikes organized in the last couple of years.

One neighboring ruler, the President of Senegal, Abdoulaye Wade, has thrown support behind the military group that has taken control of the resource rich nation. Describing the head of the military coupe as “honest”.

In Africa, many nations have been beset by instability, corruption and violence since colonial times.

However for the people of Guinea and the international community this development certainly presents an opportunity for change and hopefully a change for the better.

Even if there is a successful transition from military to civilian rule, it is a question whether the nation can break away from a one party rule to a truly functioning democracy.