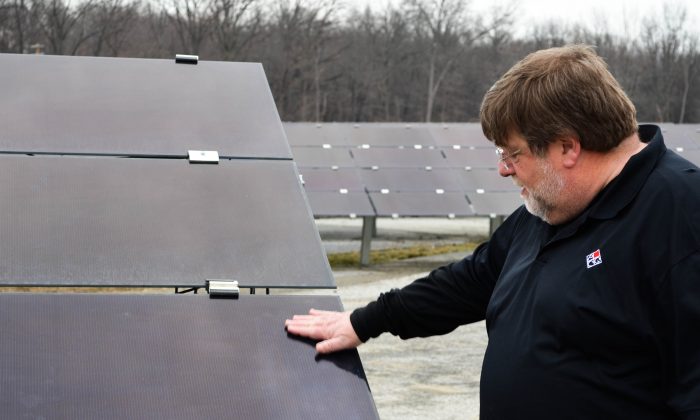 WALLKILL—President Container Group partnered with the state, the county, the town of Wallkill, and a well-known company to install a solar array that powers its entire production center. In doing so, the company and the town led the way in establishing a large solar array, something being considered by other towns in Orange County.

Vice President of Operations Richard Goldberg said the producer of corrugated boxes worked with all levels of government and GE to build a 10-acre solar array in less than a year that satisfies all stakeholders.

The manufacturing facility in Wallkill planned to go 24/7, which would substantially increase its energy costs. “The savings presented by which we can generate two megawatts of energy is an annual savings of about 25 percent of our electric bill,” Goldberg said. The savings justified hiring more people for its expanded operations.

Localities all over the country are wrestling with the emergence of solar arrays especially when the installations cover acres of open land.

The company bid into Orange & Rockland’s energy payback program. NYSERDA, the New York State Energy Research and Development Authority, offered further incentives that made it worth the investment, he said. This opportunity arrived at the right time for the company.

Localities all over the country are wrestling with the emergence of solar arrays, especially when the installations cover acres of open land. Appropriate zoning, aesthetics, emergency services, and impact on neighboring properties have to be taken into consideration.

When a municipality educates itself about solar and works with a company, the results can be good as is the case with President Container’s solar array in Wallkill.

The savings justified hiring more people for its expanded operations.

Goldberg credits Wallkill officials for the quick approval and installation process. “Dan [Dan Depew, Wallkill supervisor] did a really good job of ensuring that his team learned about solar.” He said the town educated itself to respond intelligently to the company’s needs and the company followed the town’s approval requirements. “We worked with them every step of the way.”

Wallkill is moving ahead with a solar array of its own. The town published a request for proposal in March 2015 for a turnkey installation of a solar photovoltaic energy system at the town landfill on Banke Road.

Wallkill Supervisor Dan Depew said the town was happy to assist President manage its energy needs by putting in a solar farm. He said two other companies nearby—Revere Smelting & Refining and Monroe Cable—will also use solar to supplement their energy needs.

The town is getting interest from landowners and solar development companies to build solar farms in agricultural or residential sections. “In that case, we have a moratorium in place right now until we can get the language in place that would make sure that we protect the quality of life of the people that live in those areas,” Depew said.

A local law regulating solar installations is not “in a way to obstruct but more in a way to guide and teach and work with them.”
— Dan Depew, supervisor, , Town of Wallkill

He said the legislation should be in place by the end of April. “Right now we are very supportive of any existing business that wants to put solar in, in any way that we can.” Applications for ground-mounted solar arrays require site plan approval from the town planning board. The legislation is not “in a way to obstruct but more in a way to guide and teach and work with them.”

The Town of Crawford held off regulating ground-mounted arrays to better assess the situation. The Wallkill Valley Times reported that the town board agreed on Feb. 18 “to a short moratorium—Supervisor Charles Carnes said it could last as little as 90 days—on construction, installation, approval, and process of applications for solar energy systems.”

Montgomery officials are considering the drafting of a local law that fits with the community’s character. At a town board meeting on Jan. 18, Town Supervisor Mike Hayes said the municipality has no regulations for solar or wind energy, according to the Wallkill Valley Times.

Chester addressed solar in its comprehensive plan. The section on Alternative Energy states: “Alternative renewable energy resources, such as wind and solar, should be encouraged within the Town of Chester to reduce dependence on foreign energy supplies and to reduce greenhouse gas emissions.”

The board has been directed to review local zoning laws “to allow alternative energy facilities and establish land use laws to regulate the placement of such facilities to ensure that they are visually acceptable and don’t adversely affect adjoining property owners.

GE won the $3.4 million contract to design and install the approximately 19,000-panel array near the back of the company’s production and distribution center.

Thinner than most on the market, the panels operate at 93 percent efficiency.
— Richard Goldberg, vice president of operations, , President Container Group

The solar array is said to be the latest and greatest, according to Goldberg. Thinner than most on the market, Goldberg says the panels operate at 93 percent efficiency. The setup is straight-forward. Photovoltaic cells line each panel which is attached to a cable. The sun’s energy that is gathered heads to an inverter which converts it from solar to electrical power.

Maintenance of the array includes the panels, inverter, and rolling landscape around the array. Panels last about 25 years. The company has a maintenance contract for the panels and inverter with a firm contracted by GE.

“The only real maintenance is cutting the grass as needed.” Goldberg said the company planted a type of grass that lies flat and doesn’t require much care. “Once a year you have to cut it,” he said.

The panels are installed to conform to the topography. The panels are built around a storm water pond, leaving it undisturbed. Goldberg said, “There was no additional change to the contour of the land. You’ll see the way the panels dipsy doodle on the curvature of the land. It’s kind of nice because you’re staying green.”

Only a few trees were cut. A tree border lines the property along Route 17 and hides the array during warmer months. “Nobody sees it.” Even in winter, the bare branches mask the array from fast moving traffic. A barbwire fence secures the entire array.

The inverter box is monitored by Nexamp, a local company contracted by GE. The company resets the inverter as needed and collects data as part of regular servicing. A Nexamp employee regularly cleans filters, which helps to circulate the air within the device. A cellphone in the inverter gives Internet access to GE for monitoring.

Goldberg said there are no batteries. “Everything is direct energy.” The production facility at President Container is essentially off the grid during the day. At night, O&R kicks in. Goldberg says that if the array produces more energy than the company needs, “there is an opportunity for reverse metering,” but said that doesn’t happen too often.

The array is working out so well that the company is investigating solar for its headquarters in New Jersey after the building lost its roof during Hurricane Sandy. “We have gone through a lot the last couple of years rebuilding the facility. We are taking a look at [a solar array] now.”