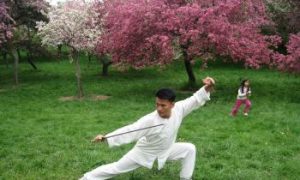 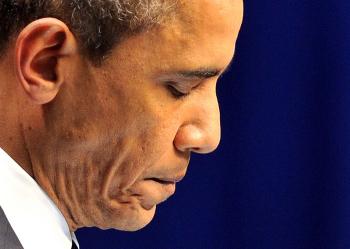 President Barack Obama speaks during a memorial event, 'Together We Thrive: Tucson and America' at the McKale Memorial Center in Tucson, Arizona, on Jan. 12. Obama led a tribute service for the six people who were killed and the 14 wounded in the assassination attempt on Congresswoman Gabrielle Giffords, who is recovering from a gunshot wound to the head at a nearby hospital. (JEWEL SAMAD/AFP/Getty Images)
US

By Andrea Hayley
Print
WASHINGTON—It was a day of prayer, recognition, and mourning as Washington honored the victims of the Tucson, Ariz., shooting that claimed 6 and injured 14, including Congresswoman Gabrielle Giffords.

President Obama traveled to Arizona, Wednesday for the memorial event Together We Thrive: Tucson and America, where he highlighted the courage and fortitude of the American people. The event offered an opportunity for collective mourning in the wake of what many have called a heinous act.

"There is nothing I can say that will fill the sudden hole torn in your hearts.  But know this: the hopes of a nation are here tonight."

"We mourn with you for the fallen.  We join you in your grief," said Obama.

"The loss of these wonderful people should make every one of us strive to be better in our private lives—to be better friends and neighbors, co-workers and parents.

I believe we can be better. Those who died here, those who saved lives here—they help me believe. … I believe that for all our imperfections, we are full of decency and goodness, and that the forces that divide us are not as strong as those that unite us," Obama added.

Obama and the first lady, with a bipartisan congressional delegation from Arizona, Homeland Security Secretary Janet Napolitano, Democratic Leader Nancy Pelosi (D-Calif.), Attorney General Eric Holder, and Supreme Court Justice Anthony Kennedy, traveled on Air Force One to attend the evening ceremony at the University of Arizona. The president and first lady planned a return to the White House that night.

Earlier in the day, members of Congress and staff attended a private church service at the Capitol Visitor Center auditorium.

At the door, most stopped to sign a condolence book. Another set of books in the Cannon House Office Building saw a steady stream of visitors throughout the day, as staff and members of the public took the opportunity to express their thoughts.

Before and after the service, members of the House took turns speaking about their resolution honoring those who were killed or injured in Saturday’s shooting outside a grocery store in a Tucson suburb. The resolution passed with unanimous consent.

The resolution, which will serve as a remembrance of the day, included the particulars of the dead, such as the fact that 9-year-old Christina Taylor Green had been elected to the third grade student council at Mesa Verde Elementary School. It was reported that she had gone to the Congress on your Corner event with her mother to learn more about the government.

“Today we will say many prayers for our country and for the victims of this horrific event,” said Nancy Pelosi, House minority leader.

“How do you explain the death of a 9-year-old? We pray for [the parents] and will carry Christina as an inspiration in our hearts.”

Representatives appeared touched by George Morris, husband for over 50 years of Dorothy Morris, who was injured as he tried to shield his wife from the shooter. She was killed.

In recent days, details of events from the scene have revealed the actions of ordinary Americans that day.

A woman, wounded herself, fought with the gunman for his ammunition as he attempted to reload, before other citizens stepped forward to immobilize him completely.

Daniel Hernandez, a student on the job for only four days, ran toward the bullets to try to help his boss, and has since been credited with potentially saving her life by holding her upright and stemming her bleeding before paramedics arrived. He also offered her words of encouragement and held her hand.

Hernandez stood with Obama on the stage at the Arizona ceremony, which included a Native American blessing, speeches and a moment of silence.

The memorial, which was open to the public, was full with a seating capacity of 14,545.