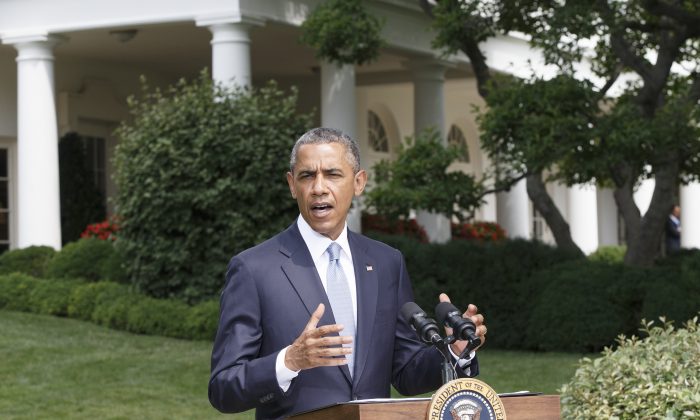 President Barack Obama makes a statement on the situation in Ukraine and Gaza, at the White House in Washington, Monday, July 21, 2014. (AP Photo/J. Scott Applewhite)
Entertainment

A representative for Kimmel is denying the rumors.

But sources at ABC told TMZ that Obama was booked on the show for Wednesday. And multiple Los Angeles Police Department sources added that Obama is scheduled to be at El Capitan on Wednesday at 3 p.m. PDT for an hour. El Capitan Theatre on Hollywood Boulevard is where the Jimmy Kimmel Show is filmed.

The scheduled interview is said to be part of a special segment. Much of the interview is being described as “serious.”

And the Secret Service are said to have been all over the theater in the past few days.

There’s been no official announcement from ABC regarding the rumored segment.

President Barack Obama speaks about the My Brother’s Keeper Initiative, at the Walker Jones Education Campus in Washington, Monday, July 21, 2014. President Obama announced that leaders of 60 of the largest school systems have pledged to expand minority boys’ access to better preschools and advanced classes and to try to prevent grade retention, suspensions and expulsions. (AP Photo/J. Scott Applewhite)

WASHINGTON—President Barack Obama announced a major expansion of his initiative to improve the lives of boys and young men of color, with educators, star athletes, companies and foundations announcing partnerships to help minority boys in conjunction with his “My Brother’s Keeper” program.

Obama, who first announced his initiative in February, said Monday they plan to continue to build support for the program around the nation to ensure those who are the most risk will get the help that they need.

“This is a movement that we’re trying to build over the next year, five years, 10 years, so we can look back and say we were part of something that reversed some trends that we don’t want to see,” said Obama, who made the announcement at initiative at the Walker Jones Education Center in Washington, D.C.

Obama unveiled the “My Brother’s Keeper” program at the White House in February. Under the initiative, businesses, foundations and community groups coordinate investments to come up with or support programs that help keep young people out of the criminal justice system and improve their access to higher education. Several foundations pledged at least $200 million over five years to promote that goal.

Obama also signed a presidential memorandum creating a government-wide task force to evaluate the effectiveness of various approaches so that federal and local governments, community groups and businesses will have best practices to follow.

Some of the commitments announced Monday include an effort by the National Basketball Association to recruit 25,000 new mentors and work with at-risk students to increase attendance and performance. AT&T is also announcing an $18 million commitment to support mentoring and other education programs.

The Emerson Collective and its partners are committing $50 million to collaborate with school districts and educators to launch a competition to find and develop the best designs for next generation high schools. The Emerson Collective was founded by Laurene Powell Jobs, wife of the late Apple founder Steve Jobs, along with partners from Silicon Valley.

Obama also said leaders of 60 of the nation’s largest school systems have pledged to expand minority boys’ access to better preschools and advanced classes and to try to prevent grade retention, suspensions and expulsions. The College Board is also investing over $1.5 million all African-American, Latino, and Native American students with strong educational skills enroll in at least one advanced placement class before graduation.

Phi Beta Sigma, one of the nation’s biggest black fraternities, also announced last week during its centennial celebration in Washington that it would train 10,000 men to become mentors.