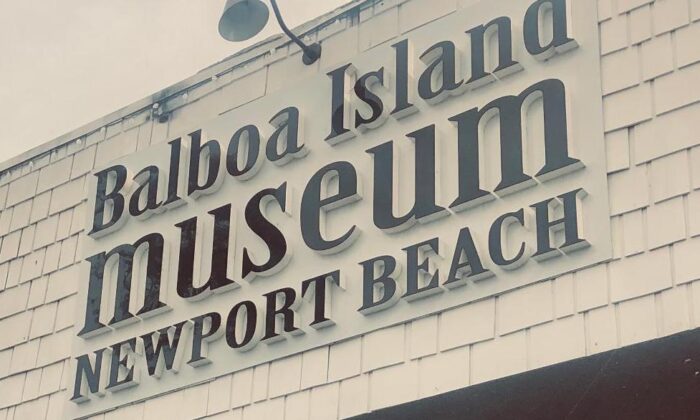 Sandwiched between an olive oil store and upscale bathing suit shop, the museum was founded in 1999 as an institution dedicated to documenting, preserving, and presenting the culture of Orange County, with a focus on the coastal communities of Balboa Island and Newport Beach.

Exhibits and displays showcase everything from local surfing greats, to seafaring movie stars, to World War II heroes, to exquisite maritime ship models. Visitors and locals alike are welcome to experience the evolution of a sleepy beach town, harking back to a simpler time when the beaches and shores of the Orange County coast were a place to get away from it all.

The original museum started off humbly in a rented upstairs unit near the Balboa Island Ferry. Even though it was small and sparsely staffed, thanks to dedication of its board, volunteers, and donors, the museum eventually moved downtown to a tiny Marine Avenue bungalow where its popularity and exposure grew.

In 2018, the museum was finally ready to expand and opened at its current location at 210 Marine Avenue, in a historic building from 1927 right in the heart of the Island’s “Main Street.” For many visitors, it stands out as one of Southern California’s Orange County gems.

“Many of our guests who sign our guest book write, ‘This is the best small museum I have ever visited,’” said Island resident and former president of the museum’s board of directors Shirley Pepys. “I think it makes people happy when they walk in here, and I think it’s because we have a family feel, a community feel.”

“It’s free, there’s no cost to visit, kids love it, parents love it,” Pepys said. “That was all by design, to make it a community place, to make people happy, and bring back happy memories.”

For many Angelenos, those memories began as children when their parents would leave the hustle and bustle of Los Angeles and travel roughly 50 miles south to vacation along Orange County’s quiet beach and bay shores during summertime respites.

One focus of the museum has been to capture those decades-old memories through written and oral histories, which can be found on the museum’s website and at exhibit kiosks.

A Place to Gather

Interactive children’s events are a key element to the museum’s popularity, where curriculum for Boy Scouts & Girl Scouts and Adventure (Indian) Guides programs are available, led by docents and local university students who engage kids through exhibits, challenging them to think about what life was like in the area more than 100 years ago—before cars, television, or cellphones.

Visitors can view new museum exhibits that rotate throughout the year, as well as art by local artists featured in its gallery, such as a recent showing of celebrated marine artist Wyland and well-known aerial photographer Gray Malin.

A special Memorial Day Pinning Ceremony in honor of local veterans is held each year, and in November, the museum co-hosts a Veterans Day BBQ held at the Balboa Island Park.

Museum events also include Sunday Suppers, guest speakers, and theatrical events, as well as cultural celebrations throughout the year, such as this month’s Lunar New Year exhibition and reception.

The latest exhibit brings to life the Chinese tradition of celebrating the Lunar New Year, which began Feb. 1. Lunar New Year is also known as the Spring Festival, representing a new beginning.

The museum’s Lunar New Year exhibit includes some local residents, including the fascinating history behind Cheong Kwong Lee and So Ching Lee and their family members who immigrated from China to Brazil and eventually to Balboa Island, where they established the popular Shanghai Pine Gardens restaurant, frequented by John Wayne and other celebrities and still in business today.

On Feb. 8, the museum is hosting a special evening in celebration of the Chinese Lunar New Year with special guests Wing Lam, co-founder of Wahoo’s Fish Taco, Youlen Chan of Phoenix Bakery, and members of the Lee family, Lam’s parents.

The event includes accounts by Lam and Chan of their families’ immigration from China to the United States and the story behind their well-known restaurant and bakery establishments in Orange County and Los Angeles.

Lam says that he and his family have a close relationship with the museum, and the event is about sharing the history of Chinese American families with deep roots in Southern California. Guests will be treated to traditional celebratory pastries from Phoenix Bakery, known for its famous strawberry cakes, and still located in Los Angeles’s Chinatown after more than 80 years.

Lam’s father, Cheon Kwon Lee, moved from his village in mainland China to Hong Kong in 1950 after the Communist Party took over China, eventually landing in Sao Paulo, Brazil. Lam and his brothers Ed and Mingo Lee grew up in Sao Paulo.

After immigrating to the United States, Lee moved his family to Costa Mesa, Calif., and opened the Shanghai Pine Gardens restaurant on Balboa Island in 1970.

“I don’t think there’s anybody that lives on the island that doesn’t know who my parents are,” Lam told The Epoch Times. “My parents were always walking around the island, all the neighbors would say hello. I think we were the only Chinese family on the island as long as I can remember.”

Working in their parents’ restaurant taught Lam and his brothers a lot about the business, and in 1988, the three brothers founded Wahoo’s Fish Taco, which now has 60 locations throughout California, Las Vegas, Denver, Philadelphia, Honolulu, and Tokyo.

“We have our parents to thank for our successes today, they went through so much to come here and do what they did,” said Lam. “Every opportunity we get to thank our parents, we do it.”