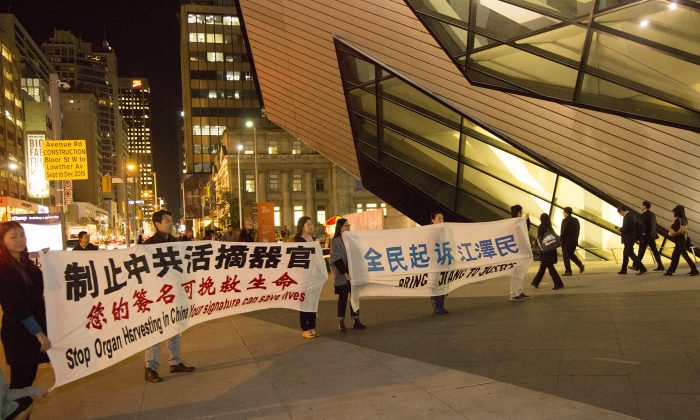 Protesters gather outside the Royal Ontario Museum on Oct 7, 2015, as Ontario Premier Kathleen Wynne attends a private event with Luo Zhijun, the party secretary for China’s Jiangsu province. Luo has presided over a violent persecution in his jurisdiction that saw the deaths of nearly 50 prisoners of conscience. (Epoch Times)
Canada

TORONTO—Ontario Premier Kathleen Wynne kicked up a small media storm by excluding the press from her meeting with a man accused of presiding over torture and murder, and who is now facing two investigations for his malfeasance in China.

The official is Luo Zhijun, the party secretary for China’s Jiangsu province. Wynne’s office had excluded media from three events held with Luo at the request of the Chinese delegation, though the premier later said it was due to a mistake in her itinerary after multiple news outlets covered the incident.

Luo was in Toronto on Wednesday, Oct. 7, to mark the 30th anniversary of the Ontario-Jiangsu Friendship Agreement.

Wynne initially said she was asked by Chinese officials to not allow media to attend the events. After being questioned on the issue, she later said a mistake in her official itinerary was to blame, and changed the itinerary to allow a quick photo-op.

Luo is an ally of former Chinese Communist Party leader Jiang Zemin, whose network within the Party is being systematically purged by current Chinese leader Xi Jinping.

Like many of Jiang’s highest-ranking allies, Luo proved his loyalty by pushing a violent crackdown on Falun Gong in his jurisdiction. According to one count, 48 adherents died in his prisons and labour camps.

Luo is widely believed to be under investigation by Xi’s regime, and the Epoch Times has predicted he will fall.

But on Wednesday he was on official business in Toronto, at a party hosted by his long-time friend Michael Chan, Ontario’s minister of immigration, citizenship and trade. According to reports in Toronto Chinese media, Luo has a very close relationship with Chan going back to the 1990s.

Chan is currently suing the Globe and Mail for stories documenting concerns from CSIS about Chan’s close relationship with the Chinese regime.

It was not wise for Ms. Wynne to meet such a person who is suspected of massive human rights violations.
— Joel Chipkar, Falun Dafa Association of Canada

The Epoch Times has previously reported Chan’s close ties to the regime, including a proclamation he made of his love for the motherland at a celebration of the 60th anniversary of the Chinese Communist Party in 2009 that included a military parade.

While Wynne’s events with Luo were closed to the press, some hand-picked Chinese press were there at the invitation of the premier’s office.

A spokesperson for Wynne said they were there as guests, not as journalists.

Jack Jia, publisher of Chinese News, told the Globe and Mail that the Chinese media don’t generally ask tough questions of officials, as way of explaining the special treatment. He also said it was a double standard by Wynne’s office.

While events were closed to the press, some hand-picked Chinese press were there at the invitation of the premier’s office.

That staff member was Wilson Chan, the former editor of Sing Tao Daily who presided over the paper when a translated Toronto Star article was edited to put a pro-Chinese regime spin on it, a change he defended. He was later fired from the paper and hired by Michael Chan’s office, before moving to the premier’s office.

Luo and many of his colleagues are under investigation by the World Organization to Investigate the Persecution of Falun Gong. Several have also been sued in countries around the world.

According to the Falun Dafa Association of Canada, Luo was involved in the persecution, torture, and death of Falun Gong practitioners while he held the positions of mayor of Nanjing City, governor of Jiangsu Province, and now in his current post as the Communist Party secretary of Jiangsu Province.

“It was not wise for Ms. Wynne to meet such a person who is suspected of massive human rights violations, let alone kowtow to his desire for privacy and closed-door talks,” said Joel Chipkar, a spokesperson for the association.

Chipkar suggested the exclusive access to Luo prevented him from being served with legal papers.

Lawsuits in foreign countries was one of the only ways those who had suffered torture in China could redress the crimes against them, but that has recently changed.

With the shift in power within the Chinese Communist Party now tilted strongly in Xi’s favour, Chinese people around the world have taken advantage of recent legal changes in China that allow them to sue former leader Jiang Zemin.

Over 100,000 lawsuits have been filed against Jiang for his attempt to wipe out Falun Gong, a campaign that has led to 3,858 confirmed deaths in due to police persecution and tens of thousands of disappeared, many of whom are believed to have died in forced organ harvesting operations.

This article was corrected from an earlier version.