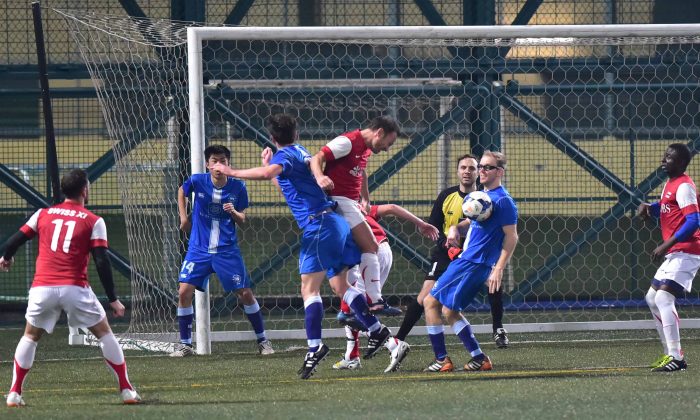 On Saturday (Jan 31) the game between Eastern and I-Sky Yuen Long held at Kowloon Bay Park was settled by three first half goals from Rohan Ricketts in the 27th minute, a Lee Chi-ho header in the 37th minute, and a Giovane Da Silva goal in the 40th minute which saw Eastern progress to the next round.

Sunday’s (Feb 1) game, also at Kowloon Bay Park, between YFCMD and Wong Tai Sin, was settled in Wong Tai Sin’s favour, when Chan Cheuk-kwong scored the only goal of the game late into extra time after the game ended normal time scoreless.

Wing Yee now head the second division with 34 points, Mutual are second with 26 points, Kowloon City are third with 24 points, and Kwong Wah fourth with 23 points all having played 12 matches.

Yau Yee League
The leadership positions continued to switch in the first division with clashes between some of the contenders, and GAS’s third consecutive draw with the top 3 teams. Games saw Corinthians win 3-2 against Baker Tilly Spartans, Albion beat Boca Seniors 5-nil, USRC draw 2-all with GAS, Colts beaten 3-2 by Swiss XI, KCC Dragons win 4-1 against Wanderers, and The Store House Squadron end their game with French Kiss with a 1-nil win.

Albion lead a cluster at the top of the table on 35 points, USRC are second on 34 points , with KCC Dragons third on 33 points, Wanderers fourth on 32 points, and GAS fifth with 28 points, all from 16 matches played.

HKDC Mobsters now lead the table with 37 points from 16 games, with HKU70’s second with 33 points from the same games, and The Store House Hearts third on 30 points.

In the third division, University won 4-1 against Goal Visio, White Youth won 2-1 against HKUSA, IES were 9-nil winners over Scorpions, Dynamo were 5-nil victors over Yan Po, Green Cypress FC won 2-nil against Darts, and CAPS were 1-nil winners against HOB. University now lead the table with 41 points from 16 games, with IES second with 39 points from the same games.

HKSS lead the division with 39 points from 15 games, with Power 22 second with 38 points from the same games.