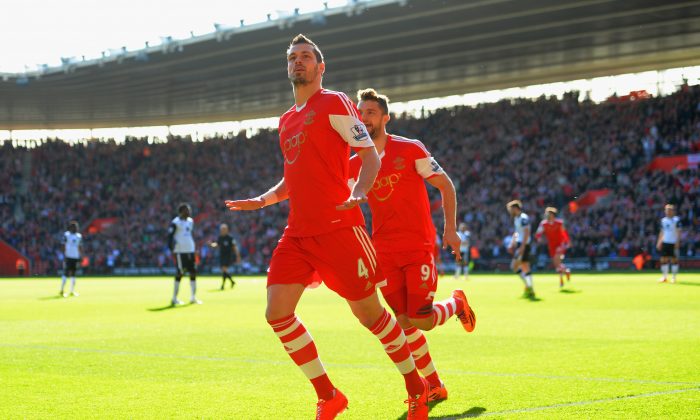 Morgan Schneiderlin of Southampton celebrates scoring the opening goal with Jay Rodriguez of Southampton during the Barclays Premier League match between Southampton and Norwich City at St Mary's Stadium on March 15, 2014 in Southampton, England. (Photo by Christopher Lee/Getty Images)
Soccer

Divock Origi could be signing for Liverpool, Ezequiel Lavezzi is wanted by Chelsea, and Tottenham Hotspur want Jay Rodriguez and Morgan Schneiderlin.

Liverpool are about to complete a £10 million deal for Divock Origi, according to the Daily Star.

If the deal goes through, Origi will return to his current club Lille for a one season loan before joining the Reds.

Liverpool goalkeeper Simon Mignolet thinks that the 19-year-old striker has what it takes to succeed in the Premier League.

“He’s strong and quick, he’s got skill, he can score a goal as well, so he’s got all the qualities you need to become a top striker in the Premier League.”

Another player that has been linked with an Anfield move is Argentinian winger Ezequiel Lavezzi.

Lavezzi, who could go for £18 million, has also been linked with a move to Chelsea.

Meanwhile, Jay Rodriguez and Morgan Schneiderlin could reunite with their former Southampton manager at Tottenham.

Mauricio Pochettino is keen to sign the duo, and should they leave, they would join the exodus of Southampton first team players this summer to bigger clubs.

Dani Osvaldo is said to be leaving, and Jose Fonte could go to Cardiff City.