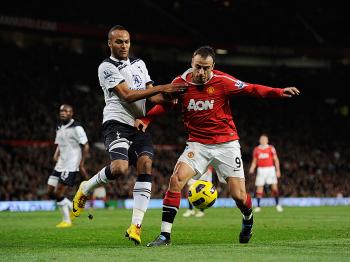 By Denis Charlton
Print
Tottenham Hotspur will be hoping to avenge their 2–0 defeat at Old Trafford at the end of October when the two teams meet at White Hart Lane on Sunday.

With Spurs part of the select group challenging for the Premier League title these days, the matches between the two old rivals are again becoming more important.

In the '60s, their clashes were for many the highlight of every campaign in that era, simply because they both had some of the most exciting players in the world on show and both played a brand of free flowing football that was a delight to watch.

Two of the most famous meetings between the clubs came in the 1964–1965 season when Spurs won the fixture at White Hart Lane 5–1 and United won the return at Old Trafford by the same score. Jimmy Greaves’s wonderful goal in the Spurs win is still talked about today.

Gareth Bale is already being talked about in the same breath as Spurs 60’s legends such as Greaves, Cliff Jones, and Terry Dyson. The Cockerels will be hoping to have a return from injury for the Welshborn left wingback for this important game—he is off the EPL injury list.

However, the big news at Tottenham this week has ironically been the arrival of someone who played 265 times for Manchester United up to his final appearance in the last game of the 2002–2003 season.

David Beckham will be training with Spurs during the American Major League Soccer off-season and manager Harry Redknapp is still hopeful of signing the Los Angeles Galaxy star on a two-month loan deal. However, the Galaxy understandably does not want Beckham to play competitively in view of the serious injury he sustained while on loan with AC Milan during the same time period last year.

Wayne Rooney and Nemanja Vidic both missed the FA Cup win against Liverpool but United expect the pair to be fit for Sunday. However, veteran Dutch goalkeeper Edwin van der Sar is struggling to throw off a particularly unpleasant virus, so Tomasz Kuszczak is likely to continue between the sticks for at least another week.

United manager Sir Alex Ferguson has expressed satisfaction at the progress of reserve central defenders Jonny Evans and Chris Smalling. Evans did well against Liverpool, and could have even made it onto the scoresheet but for the post getting in the way of a good header, while Smalling was impressive in the victory over Stoke City a few days earlier.

“Jonny was excellent against Liverpool,” remarked Sir Alex on the Manchester United website. “I was pleased with him. He tired a little before the end, that’s why we brought Chris on.

“But it’s been a great week in the sense that Chris played against Stoke and I was able to play Jonny on Sunday. They both need games and these two boys are excellent players.”

Both certainly look the part when playing alongside an experienced colleague such as Vidic or Rio Ferdinand but it is hard to forget that when they were played together against West Ham in the Carling Cup, the result was a four-goal thrashing.

It might therefore be argued that the pair still have some way to go, and one suspects that all United fans will breathe a sigh of relief to see Vidic and Ferdinand lining up beside each other at the back.