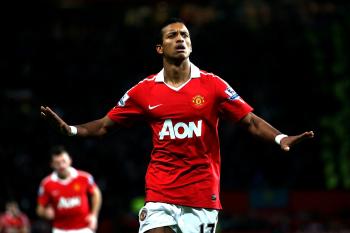 By Denis Charlton
Print
Manchester United extended their unbeaten run in the Barclays Premier League to 20 matches with a 2–1 win at home to Stoke, thanks to strikes from Javier Hernandez and Nani. In reply, Dean Whitehead scored the first goal at Old Trafford by a Stoke City player for 30 years.

United dominated the first half and carved out a number of chances, none of which were taken until Nani’s cross was cleverly converted with an audacious back heel by Hernandez who had managed to squeeze half a yard inside his marker at the near post.

Sir Alex Ferguson’s side really should have had the game wrapped up by halftime. Darren Fletcher, Ryan Giggs, and Darron Gibson were bossing the midfield with the Welshman at times showing flashes of the Giggs of old.

Gibson has been linked with a possible loan move to Stoke or another club in order to spend more time out on the pitch rather than the bench. The young Irishman played 78 of the 90 minutes on this occasion and had a decent game although he did not have his shooting boots on, skying a couple of pot shots from outside the area in the first half.

A slender one-goal lead is not enough against a team such as Stoke. Ferguson was quoted on the Premier League website saying, "Stoke are such determined lads, they make it difficult for every team and never give in.”

In fact the United manager was only too well aware that it only needs someone to get on the end of a long throw from Rory Delap or a high ball pumped into the box and they can be back in the game.

And, in fact that is pretty much what happened. In his halftime talk, Stoke manager Tony Pulis no doubt demanded more of his boys going forward and they started the second half with much more purpose.

Tuncay is always capable of a moment of class, and with the half only five minutes old the Turkish international produced the cross of the night for the unmarked Dean Whitehead to nod the ball past Tomasz Kuszczak and bring Stoke level.

Stoke’s equalizer proved to be a wake up call for United who surged forward to try and rectify the situation. However, the men from the Potteries are competent at closing down opponents and denying space.

Consequently, it was hard for the United forwards to find clearcut openings, and it took a magic moment from Nani to turn the tide. Receiving the ball about 25 yards out on the right hand side, the Portuguese winger wrong footed three defenders with a sublime turn to bring the ball inside onto his left foot, before rifling home an unstoppable shot from the right-hand edge of the penalty area. Asmir Begovic in the Stoke goal had no chance.

With plenty of time left, and United unable to find the cushion of a third goal, there was an air of anxiety around the theatre of dreams. But Sir Alex sent on the two experienced Michaels—Carrick and Owen—for youngsters Hernandez and Gibson and the hosts looked steadier as the clock ran down.

The win increased United’s advantage over their crosstown rivals City to three points, with a game in hand. United rested Wayne Rooney and Rio Ferdinand in the win.

Wins for Birmingham and Fulham

Two other Premier League matches played on the Tuesday produced much needed wins for Fulham and Birmingham City.

At Craven Cottage, a scintillating Simon Davies strike from 25 meters a minute before the break inspired Mark Hughes side. They increased their lead through American Clint Dempsey on 56 minutes; then a powerful header from Norwegian Brede Hangeland at the 65 minute mark ensured that there would be no way back for the Baggies.

Visiting Birmingham City went ahead at Bloomfield Road through former Arsenal midfielder Alexander Hleb, but Blackpool drew level thanks to a DJ Campbell goal after 68 minutes.

But it was Alex McLeish’s side that hijacked the three points with a soul destroying winner in the 89th minute courtesy of defender Scott Dann. Birmingham are by no means out of trouble, though they are now a point ahead of local rivals Aston Villa, which will give them great satisfaction.