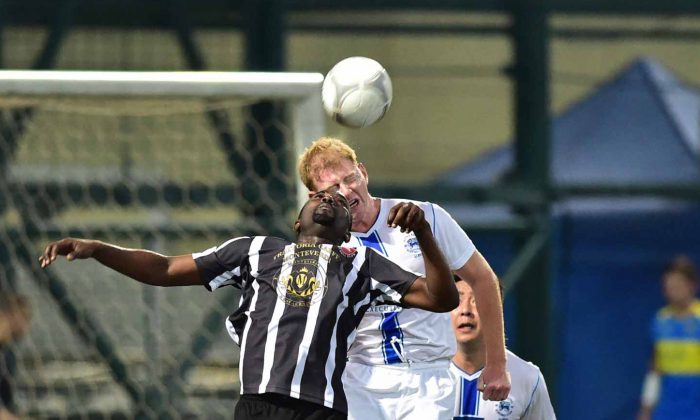 Hong Kong—There was a round of Premier league games played this week, with leaders Sun Pegasus held to a nil-all draw by Wo Foo Tai Po; Eastern defeating I-Sky Yuen Long 3-nil, BC Rangers emerging 3-nil victors against Wong Tai Sin, and heavyweights South China and Kitchee drawing 2-all.

Eastern took the lead after 8 minutes in their Saturday (Nov. 22) game against I-Sky Yuen Long when Michel Lugo fired home from Miroslav Saric’s pass, and held the lead until half time.

Dylan Macallister added a second for Eastern early in the second half after taking a pass from Roberto Affonso, whilst Giovane Da Silva added a third late in the match.

BC Rangers and Wong Tai Sin were scoreless at the interval, but BC Rangers took the lead on 55 minutes when Chan Ming-kwong scored. Yago Lopez added a second with a header after 59 minutes, with Cheng Siu-kwan completing the scoring in added time.

South China took the lead after 12-minutes in their contest with Kitchee when Leung Chun-pong scored, a lead that they retained until half time.

South China doubled their lead in the 51st minute when Chan Wai-ho headed in from Manoel Santos’ free kick.

However, Kitchee pulled a goal back after 71 minutes when Juan Belencoso finished from Jorge Tarres’ pass, and equalised after 87 minutes when Lam Ka-wai scored from a free kick.

The Premier League standings are led by Sun Pegasus, with 16-points from 7-matches, with Kitchee and Eastern joint second with 10 points from 4 matches, and South China fourth with 8 points from 5 matches.

HKFC now lead the table on 29-points, with Metro Gallery Sun Source and Shatin joint second on 26 points, though the former have 2 games in hand on the leaders, and the latter one game in hand.

Tung Sing now lead the division on 31 points ahead of Central & Western on 26 points.

In the first game at Sports Road, Wanderers and title rivals USRC fought out a draw in a game with few chances, but a lot of activity for the officials. In one of the few chances created, Steve Everest broke through and chipped the ball onto the roof of the net after ten minutes.

The direction of the game changed after 37 minutes when Wanderers’ Paul Jarrett, wearing the captains armband in one of his last games, was red carded. Despite the additional player for most of the second half, USRC showed little ambition in attempting to get a result, maintained a back four with only Terry Harris forward for Wanderers, and only really threatened with long range shots that were rarely on target. The referee showed a flurry of yellow cards to both sides, and USRC were also reduced to 10 men in the 77th minute when Maychol Sabino was red carded for his second yellow card. He was followed in time added on when Wanderers’ Steve Everest was also dismissed after incurring his second yellow card of the game.

Albion took advantage of their rival’s draw, winning the following game with a late strike earning a 1-nil victory over Corinthian’s.

Albion now lead the table with Wanderers on 22 points, through better goal difference, USRC are third on 21 points, KCC Dragons are fourth on 20 points and GAS are in fifth place on 18 points.

Second Division
In the Yau Yee League second division, HKDC Mobsters drew 1-all with HKU70’s, GGFC drew 1-all with WYFC06, KCC Knights were 3-1 victors over ANP, The Store House Hearts won 5-2 against CS Old Boys, and SFALO Oxford were 3-1 winners against Azzurri.

HKDC Mobsters and HKU70’s are now joint leaders on 23 points.

University now head the table on 26 points, with IES second on 25 points.

Fourth Division
In the fourth division, Power 22 won 2-1 against WYFC84, Grasshoppers were 3-nil victors over Outward Bound, Standard Chartered were beaten 6-nil by HKSS, Friends of Barclays won 1-nil against Bapcoll, and Youth Coaches drew 1-all with Hung Art.

HKSS now lead the table on 27 points, ahead of second placed Power 22 on 26 points.