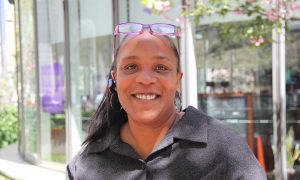 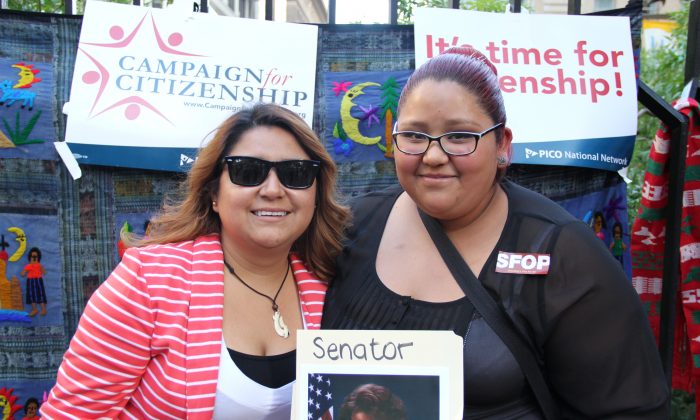 SAN FRANCISCO—Amid the bustling and business of the Financial District rush hour, songs and prayers in Spanish are not normally heard. Now they will be.

A group of immigration reform activists are determined to hold out in front of Senator Dianne Feinstein’s office at One Post Street, until they see real change.

It’s not a relaunch of the Occupy movement though, since nobody plans to bring a tent or start a revolution.

Since this Monday, every weekday evening a group of Bay Area residents, motivated by their faith, gather in front of the Senator’s office for a prayer vigil. They bring instruments, candles, and a big colorful tapestry.

Two hours later they pack up and leave in an orderly fashion.

They are concerned about the rights of undocumented immigrants and are here to nudge Senator Feinstein to become a more vocal supporter for comprehensive immigration reform.

“All of us as Americans need to band together to uphold our values about the dignity of every person, whether they are documented or not,” Father Richard said.

Feinstein is a senior member of the Senate Judiciary Committee and thus a key influencer in moving forward a piece of legislation that is seen as the boldest attempt toward comprehensive immigration reform in many years.

It was introduced two weeks ago by a bipartisan group of senators and would for the first time open a pathway to citizenship for the 11 million undocumented immigrants in this country.

“We see this as a special time,” said Smith. “We want to seize that moment, encourage it, and make sure our voices are heard in this conversation.”

SFOP is part of the nationwide Campaign for Citizenship, demanding a seven-year pathway for citizenship, as the “only solution that recognizes the inherent dignity and rights of all human persons.”

Samantha Romero is one of the community leaders with SFOP who came out on Monday to pray and sing for immigration reform. Both her and her parents are undocumented immigrants.

She came from Mexico to California when she was 9 years old. While Samantha can stay here under a 2012 federal program that spares certain undocumented youths from deportation, she is worried for her parents. Samantha wants to go to college, but she does not see how she can afford it. Being a noncitizen, she would not get financial aid.

Father Richard, who is priest at The Episcopal Church of St. John the Evangelist in the Mission, knows firsthand many stories of “families being torn apart” due to the current immigration system.

He tells the story of a young woman from his community, a mother of two small boys. One day when coming home from work, she was pulled over by the police.

Having a record as a victim of domestic abuse, she was taken in. Immigration officials confirmed she was undocumented. She was detained for 10 days, unable to tell her boys what happened to her. She was then released in Mexico, cutting all ties to her family here.

“The time is long past due for a reform of these unjust laws that are causing so much pain and fear in our communities,” Father Richard said.