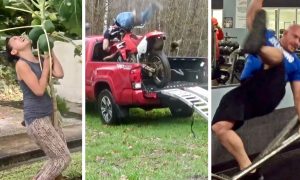 It’s no secret that lifting weights has incredible benefits for everyone, especially the elderly as it improves bone density, something we often lack as we age. But the bodybuilders at this gym don’t expect the grandmother who enters in a velvet tracksuit to beeline for the squat rack.

As the buff guys chat and bob their heads to their music, Grandma starts stretching in the squat rack. She grabs a pair of 1lb dumbbells and does some curls and lunges. Then, she loads a barbell with two 45lbs plates and asks a guy nearby to spot her.

He looks apprehensive and doesn’t just spot, but outright holds the bar. So when she drops into her squat and bounces back up just as quickly, he looks over her head at his buddy completely wide-eyed. He lets go and she finishes her set.

She follows it up by benching the same weight with another astonished spotter, and then moves over to deadlift and loads the barbell with hundreds of pounds. “That’s pretty heavy,” says a guy nearby, who quickly gets out his phone to film. “375?” she says. “I think I can do it.”

She does a single rep – not easy, but it sure doesn’t stay on the floor. She makes a joke about hearing her back pop.

What the bodybuilders don’t know is that this 83-year-old grandma is actually a popular 29-year-old powerlifter, Meg Gallagher, who has a popular YouTube channel and is a BodyBuilding.com sponsored athlete. Before peeling off her makeup she finishes by asking some of the big guys to jump on their machines and do a decent amount of weight.

Watch the video to see the buff bodybuilders’ shock as they see a grandmother shifting some serious weight!