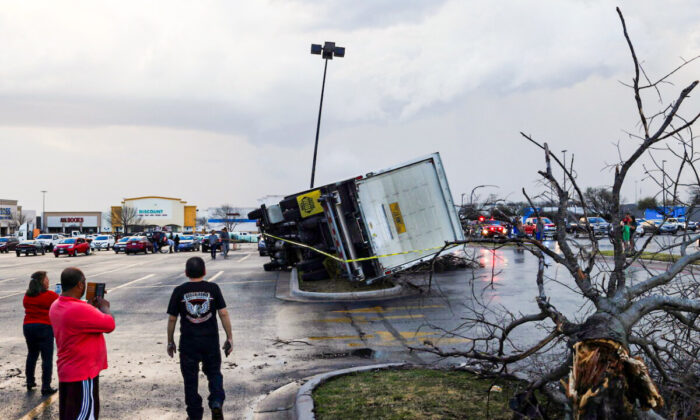 People look at an overturned truck in a parking lot after a tornado in a widespread storm system touched down in Round Rock, Texas, on March 21, 2022. (Tamir Kalifa/Reuters)
Texas

Weather officials warned people to take shelter after a powerful tornado touched down in Northern Texas on May 23, bringing with it hailstones and potential flash flooding.

“A very dangerous large tornado is on the ground north of Morton,” the National Weather Service said on Monday alongside an image of the large storm system which was captured by an onlooker and shared online. Morton is a city in Cochran County, Texas with a population of 2,006.

The storm has wind gusts between 60 to 70 mph, NWS said in its hazardous weather outlook. A tornado warning remains in effect.

One storm chaser in Texas captured the tornado on video and described it as an “absolute monster.”

Officials urged people to take cover immediately and move to a basement or interior room on the lowest floor of a sturdy building.

“Avoid windows. If you are outdoors, in a mobile home, or in a vehicle, move to the closest substantial shelter and protect yourself from flying debris. Heavy rainfall may hide this tornado. Do not wait to see or hear the tornado. TAKE COVER NOW!” NWS said.

A line of thunderstorms also moved across Bailey, Parmer, and Castro County on Monday, NWS of Lubbock, northwest Texas, said in a tweet, while warning that the storm system could bring hail up to half a dollar in size.

Officials have said that severe thunderstorms will bring heavy rainfall creating flash flooding in some areas of Texas, as well as New Mexico and Oklahoma.

“Shower and thunderstorm chances will continue Tuesday,” officials said. “Some storms could be strong to severe with locally heavy rainfall also possible across the Caprock and Rolling Plains.”

Texas Gov. Greg Abbott has not yet declared a state of emergency and no deaths have been reported.

The storms also made their way to the Chesnee, Springs, Boiling Springs area in South Carolina, with Spartanburg County Emergency Management posting images of the damage left behind.

Those photos showed some buildings had been completely destroyed while others had their roofs ripped off. Trees and power lines were also impacted.

“We will be out tomorrow conducting additional assessments…a great job by every first responder, public works and so many others who responded to this weather event….at this time, we have not received any reports of storm-related injuries or deaths,” Spartanburg County officials wrote on Facebook.

Nearly 750 customers were without power shortly after the storm moved through, according to local news outlet WSPA.

Earlier this month, a series of tornadoes caused major damage to parts of Oklahoma and Texas as well as severe flooding.