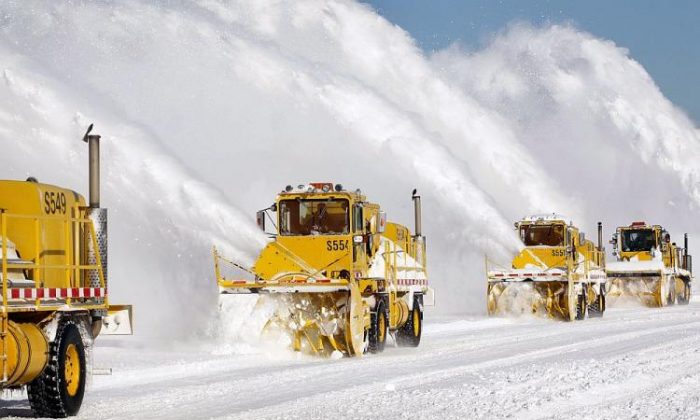 Workers remove snow from a runway at O'Hare International Airport in Chicago on Feb. 3, 2015. (Scott Olson/Getty Images)
US News

Powerful Snowstorm Set to Bring Chaos to Parts of US, Flight Delays Possible

A powerful winter storm is set to hit several parts of the United States by Sunday, according to the National Weather Service, as many prepare to head home after the Christmas holidays.

The storm is expected to swing from the Southern Rockies and stretch from Colorado to Minnesota, bringing up to 16 inches of snow and hazardous conditions.

Winter storm warnings have been issued across the states alerting to the potential dangers; including heavy snow, rain, strong winds and freezing temperatures.

The same winter storm that is impacting areas of the Plains and Upper Midwest will be heading east next week and is expected to bring locally significant snow and ice across portions of the Northeast ahead of the New Years holiday. For more, please visit https://t.co/QoghhWMaO7. pic.twitter.com/7zmBZe2ELU

Harsh conditions, icy roads, and reduced visibility are making it difficult for those heading home, particularly along sections of interstates 76, 80 and 90 in Colorado, Nebraska, and South Dakota.

In Platte, Nebraska, the local NWS office said that winds could blast as high as 45 mph into Sunday, while snow and ice will make travelling by road extremely difficult in much of the state.

“If you must travel, keep an extra flashlight, food, and water in your vehicle in case of an emergency,” the weather service says.

Meanwhile, rains and thunderstorms are expected to spread from the Southern Plains to the lower Mississippi Valley, which may trigger significant delays at major airport hubs, Weather.com reports.

Upper New York and northern New England are also preparing for areas of freezing rain on Sunday as well as up to inches of snow.

The majority of the wintery weather is expected to settle across central states by Monday. However, it is possible that lingering snow showers may still be prevalent across the Midwest on Tuesday as the storm finally starts to exit the region, according to Accuweather forecasts.

Multiple accidents have already been reported in the Minneapolis area on Saturday morning after freezing rain glazed over roads and the Minnesota State Patrol advised against travel. The Metro Transit was also forced to suspend its bus service.

The same storm system brought chaos to Southern California on Wednesday night and left one person dead after a 60-year-old woman was killed in in San Diego County when the vehicle she was a passenger in lost control and crashed into an embankment, Fox reported.