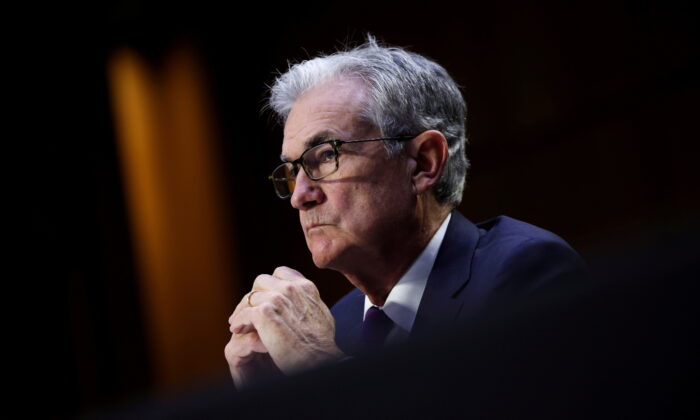 “This is not the situation that we have faced for a very long time and it is one in which there is a tension between our two objectives…Inflation is high and well above target and yet there appears to be slack in the labor market,” Powell said at a European Central Bank forum, an apparent reference to the 1970s bout of U.S. “stagflation” that combined high unemployment and fast-rising prices.

The United States is more than 5 million jobs short of where it was before the pandemic. At the Fed’s most recent meeting policymakers lifted their inflation forecasts for this year to 4.2 percent—more than twice the targeted level of 2 percent. They see that pace easing in 2022 to 2.2 percent, modestly above where they had pegged it in their previous projections in June.

Powell said the Fed’s working “hypothesis” is that inflation will largely ease on its own as the global economy returns to normal after a rocky reopening from the pandemic, a baseline that lets the Fed chief refer to interest rate increases as still “a ways off.”

But asked about his biggest concerns right now, Powell referred to the possible clash between the Fed’s two goals of stable prices and full employment, a situation that could force the Fed to make trade-offs between the two by raising interest rates to tame prices at a time when it still wants to encourage job growth.

“Managing through that over the next couple of years is the highest and most important priority and it is going to be very challenging,” Powell said at a virtual event alongside the heads of the ECB, Bank of Japan and Bank of England.

His comments are among the most direct the Fed chief has made on a topic policymakers have tried to downplay: That current high inflation, if it persists, could force them to begin to tighten monetary policy before they deliver on a promise to reach “maximum employment” and fully heal the job market of its pandemic scars.

Typically the rates of unemployment and inflation are inversely related, partly due to monetary policy and the use of interest rates to either stimulate or depress the demand for goods and services, thus influencing prices and hiring.

That relationship seemed to weaken in recent years, with low inflation existing side by side in the United States with very tight labor markets and low unemployment.

But the global supply shocks delivered by the pandemic has at least temporarily brought back the old dynamics, pushing the availability of goods and services out of kilter with the demand for them.

The issue now is how long that dislocation lasts, and whether inflation proves so persistent that it outruns improvement in the job market and forces the Fed to begin raising interest rates while unemployment is still high.

The risks around inflation have already prompted half of Fed officials to pencil in interest rate increases beginning next year, and while the job market may make marked progress by then Powell in his remarks said the difficulties around the world’s economic reopening had become “frustrating.”

“It is frustrating to acknowledge that getting people vaccinated and getting Delta under control 18 months later still remains the most important economic policy that we have,” Powell said in response to a question on the U.S. economic outlook. “And it’s also frustrating to see the bottlenecks and supply chain problems not getting better, in fact at the margin apparently getting a little bit worse.”

“We see that continuing into next year probably and holding inflation up longer than we had thought,” Powell said. “But ultimately the outlook for next year among my colleagues and me at the Fed for next year is quite a strong year with growth quite above trend and unemployment reaching significantly lower levels than now.”

Fed officials at their meeting earlier this month downgraded their views of U.S. gross domestic product growth for this year but upgraded estimates for next year, reflecting expectations that activity for the balance of this year will be stymied by supply issues and those restraints will fade in 2022.