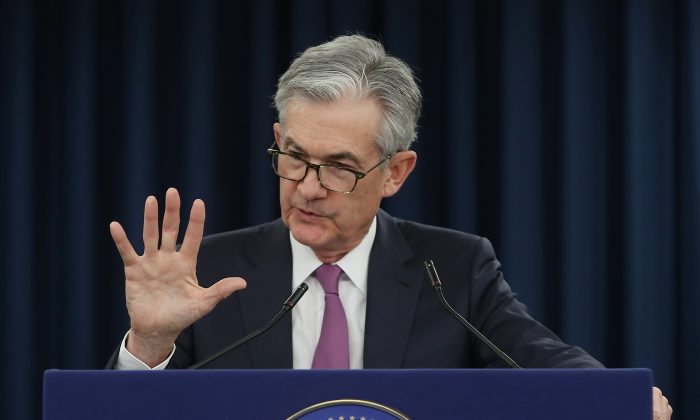 Federal Reserve Board chairman Jerome Powell speaks during a news conference in Washington, on May 1, 2019. (Mark Wilson/Getty Images)
Economies

CHICAGO—U.S. Federal Reserve Chairman Jerome Powell said on June 4 that the central bank will “act as appropriate” in response to risks posed by a trade war, remarks that may open the door to the possibility of a rate cut.

“We do not know how or when these issues will be resolved,” Powell said. “We are closely monitoring the implications of these developments for the U.S. economic outlook and, as always, we will act as appropriate to sustain the expansion, with a strong labor market and inflation near our symmetric 2 percent objective.”

The brief statement opened a two-day session at the Chicago Federal Reserve intended to shore up the central bank’s policies to prepare for the likely possibility that policymakers will eventually confront another recession with rates near zero and the traditional option of cutting rates exhausted.

The more immediate issue is how the Fed should respond to a trade war expanding on multiple fronts after U.S. President Donald Trump placed new 25 percent tariffs on $200 billion of Chinese imports and forecast new import taxes on Mexico unless immigration slows. The question of how to respond divides policymakers and markets.

Powell’s remarks did not include a reference to the current Fed target interest rate as appropriate or repeat the pledge to be “patient” before raising or lowering rates again—both standard talking points in recent Fed statements. His comments come a day after St. Louis Federal Reserve President James Bullard said in a speech on Monday that a rate cut may be needed “soon.”

Yields on 2-year Treasuries, which are responsive to expectations about Fed policy, fell marginally when Powell spoke, to around 1.87 percent from 1.91 percent.

“We are likely seeing the beginning of coordinated Fed-speak to prep market participants for at least one rate cut this year,” said John Doyle, vice president of dealing and trading at Tempus Inc in Washington.

Short-term interest rate futures imply the central bank will start cutting rates as soon as next month, as well as increasing fear that uncertainty about how the trade conflict will be resolved could push the United States and other economies into recession.

Asked on Tuesday to interpret market expectations of rate cuts, Chicago Federal Reserve President Charles Evans told CNBC, “at face value, it suggests that the market sees something that I haven’t yet seen in the national data.”

He said he sees rates as having been appropriate but that uncertainty and tepid inflation presented risks worth monitoring. Over the long run, he said, policymakers may want to be more aggressive, using low rates to let inflation and economic momentum build.