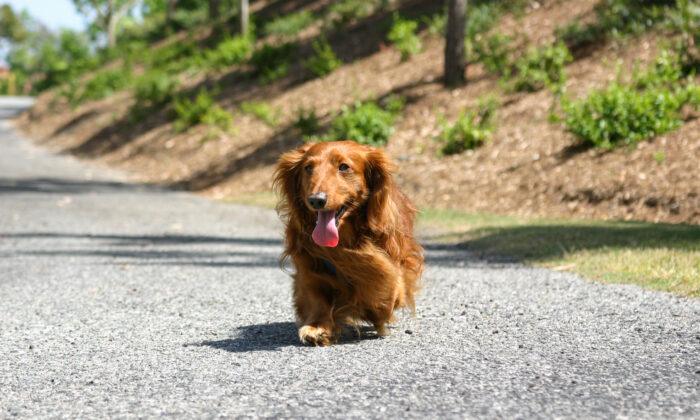 A dog walks without a leash in Lake Forest, Calif., on May 15, 2009. (John Fredricks/The Epoch Times)
Southern California

GARDEN GROVE, Calif.—Active cases of dog heartworm, a parasite only transmitted from animal to animal through mosquito bites, have been detected in at least three cities in Orange County, the county’s vector control district confirmed in a Jan. 19 statement.

“It is a really low risk right now, but we want to be transparent, especially if we are conducting tests,” Heather Hyland, spokeswoman for the vector control district, told The Epoch Times.

Hyland said the district developed the ability to test for the parasite after the Aedes species populated every city in Orange County after arriving five years ago.

The likelihood of a dog, cat, or wild animal becoming infected with the disease depends on the location, the number of Aedes mosquitoes in the area, and if other surrounding animals have already been infected.

If an animal has been infected with heartworm, key indicators to look out for are persistent coughing, reluctance to exercise, and lack of appetite.

“One big sign that OC Animal Care told us is if you see your dog’s belly start to swell from fluid in the abdomen, that’s from the parasite starting to attack the heart,” Hyland said.

According to the district, when a mosquito bites an infected animal, dog heartworm enters the mosquito’s system. The infection then transmits the heartworm larvae into another animal once it feeds. The larvae develop into adult heartworms over six to seven months, and the cycle continues.

To slow the spread of transmission of the mosquitoes, which only need a small amount of water to breed, the district recommends that all residents eliminate standing water around their properties by dumping, draining, and cleaning containers, including birdbaths and water bowls, once a week.

In rare cases where an area is heavily infested with mosquitoes, humans—although not a natural host for heartworms—can also become infected with the parasite.

“Mosquito control is a shared responsibility,” the statement reads. “Eliminating mosquito breeding sources and taking preventive methods to protect your dogs is critical to preventing the spread of dog heartworm.”