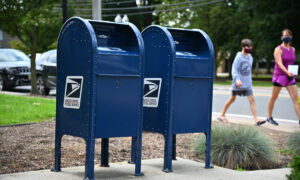 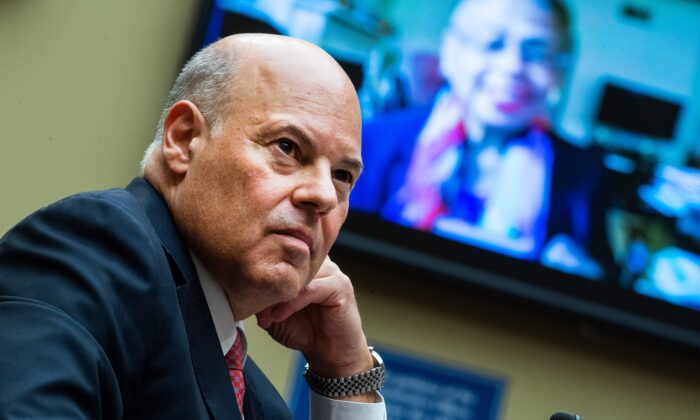 Postmaster General Louis DeJoy listens to a question during a House Oversight and Reform Committee hearing on Capitol Hill in Washington, on Aug. 24, 2020. (Tom Williams/AFP via Getty Images)
Election Integrity

Postmaster General Louis DeJoy, in Monday’s testimony on Capitol Hill, urged voters wishing to cast their votes by mail to request and submit ballots early ahead of the Nov. 3 election as a “commonsense best practice” that will ensure they reach officials on time and are counted.

DeJoy, who testified before the House Oversight Committee on U.S. Postal Service (USPS) operations and the upcoming elections, said that voters should request their ballots at least 15 days ahead of Election Day. He said his advice is meant to ensure that voters have enough time to receive their ballot, complete it, and mail it back to election officials on time.

“I encourage all Americans who choose to vote by mail to request their ballots early and to vote early as a commonsense best practice,” he told the panel. He also said that due to an expected surge in mail-in ballots because of the CCP virus pandemic, voters should mail back their completed ballots at least seven days ahead of the election.

He stressed, however, that his urging voters not to wait until the last minute “should in no way be misconstrued to imply that we lack confidence in our ability to deliver those ballots.”

“We can, and will, handle the volume of Election Mail we receive,’’ he told the panel.

“The Postal Service is fully capable and committed to delivering the nation’s ballots securely and on time,” DeJoy said, adding, “this sacred duty is my number one priority between now and Election Day.”

DeJoy’s comments came as the oversight panel opened a hearing on operational changes at the Postal Service that have drawn complaints of mail delays nationwide.

Rep. Stephen Lynch (D-Mass.) told DeJoy at the hearing that changes imposed by DeJoy this summer have threatened the reliability of mail service in his state and across the country.

“What the heck are you doing?” Lynch asked DeJoy at the sometimes contentious hearing. Either through “gross incompetence” or “on purpose,” DeJoy is ”deliberately dismantling this once-proud institution,” Lynch claimed.

DeJoy denied any wrongdoing and accused Lynch and other Democrats of spreading misinformation. He also said that he wished to clarify certain “inaccuracies about my actions” that he said were perpetuated by some media and elected officials as part of a “false narrative to the American people.”

He said that the actions that he did direct at the USPS were aimed at removing operational inefficiencies, among other aims, so as to deliver an improved level of service.

“I directed the Postal Service operations team to develop and execute on a plan to improve our adherence to the transportation schedule of our over 40,000 trips a day. We have accomplished this goal,” he said, adding that the number of on-time departures at USPS is approaching 90 percent, while “wasteful, extra trips are down by over 70 percent.”

Rep. Carolyn Maloney (D-N.Y.), the chair of the oversight committee and author of a House bill, adopted on Aug. 22, that allocates $25 billion in funding for the USPS and freezes recent changes made at the agency, accused DeJoy of using the Postal Service’s longstanding fiscal problems as an excuse “to justify sweeping and damaging changes to Postal Service operations. And we have all seen the results: national headlines about delays of days and weeks, veterans desperately waiting for their medications, sorting machines being ripped out and thrown in dumpsters.”

Acknowledging that there were some service declines, which he said were temporary and “should not have happened,” DeJoy insisted they were being remedied as he remains “laser focused on improving service for the American people.”

“I am not engaged in sabotaging the election,” DeJoy said, adding that he, personally, plans to vote by mail.