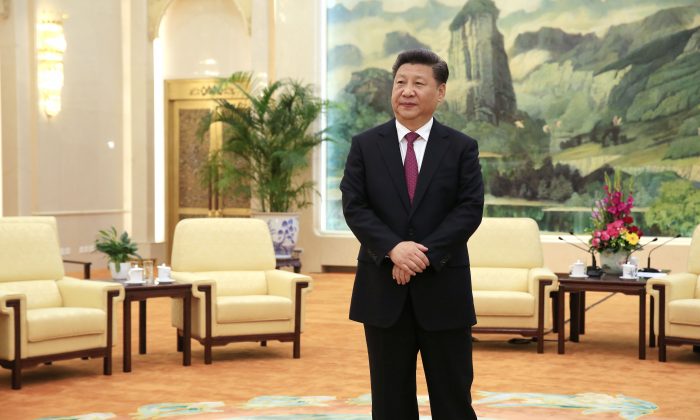 Chinese Communist Party leader Xi Jinping at the Great Hall of the People in Beijing on July 25, 2016. (How Hwee Young/AFP/Getty Images)
China

If the reports are accurate, Zhang’s reposting is, to use an imperfect analogy, akin to the governor of Alaska suddenly leaving office for a job at a top think tank in Washington, D.C.

Over the past two months, Zhang Chunxian and several provincial leaders linked with former Party leader Jiang Zemin have been replaced and shunted to sinecure positions in Beijing. Analysts say that the reshuffle is a way to control these officials, and is likely part of Xi Jinping’s effort to move against Jiang at an important Party conclave in 2017.

Unlike Western democracies, people, not institutions, are paramount in the Chinese regime. In the tradition of Mao Zedong and Deng Xiaoping, Jiang Zemin has kept a near death grip on affairs of the regime despite having relinquished all official positions for over a decade. For Xi Jinping to come into his own, he has to eliminate the political network of Jiang, and eventually purge the Party elder.

Xi has thus far been on the offensive. Through an anti-corruption campaign, Xi has removed retired elite cadres who are allies of Jiang and many of their low-level cronies. Removing top Chinese officials who are still serving appears to be a whole other matter—until very recently.

In July, three provincial Party Secretaries connected with Jiang Zemin and his disgraced loyalist, the former security czar Zhou Yongkang, were abruptly replaced and reposted to token positions in the regime’s rubber stamp legislature in Beijing.

Of the three—former Jiangsu chief Luo Zhijun, former Jiangxi chief Qiang Wei, and former Shanxi chief Wang Rulin—only one (Luo) is set to retire in November. Even so, it is peculiar for Party cadres at the provincial level to lose executive power in the final leg of their career.

The sudden reposting of former Xinjiang head Zhang Chunxian, 63, echos the three others, and bodes ill for him.

“Zhang Chunxian is in danger,” said Li Tianxiao, a political commentator with New Tang Dynasty Television in New York. “He is essentially being kept in cold storage in Beijing, and is likely being restricted while investigations into his person take place.”

The fate of People’s Liberation Army general Wang Jianping offers a glimpse of what might await Zhang. In 2014, Wang, a crony of Jiang Zemin’s top allies, was suddenly moved from the paramilitary police where he had built his career to the general staff in Beijing. Recently, Wang, his wife, and his aides were arrested.

Li the political commentator said that the reassigning of Zhang Chunxian and other provincial leaders connected with Jiang Zemin, and the fact that some of their replacements are known allies of Xi Jinping, also indicates that Xi is in the midst of securing supportive votes in the Politburo, a key decision making body.

Because some provincial leaders eventually get appointed to the 25-man Politburo, Xi wants to be sure that his denouncement of Jiang Zemin—a historic gesture—will be approved during the Communist Party’s 19th National Congress in 2017, Li said. The Party holds a National Congress once every five years to renew the top leadership of the regime.

Xin Ziling, a retired defense official with channels to moderate voices in the top leadership, approves of Xi Jinping’s steady and methodical dismantling of Jiang’s network because it allows for Jiang to be removed “without upheaval in the country.” Many Chinese officials are still supportive of Jiang because he enabled them to attain office and riches through entrenching corruption in the regime.

Luo Ya and Xie Dongyan contributed to this article.