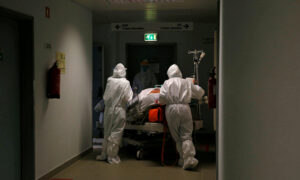 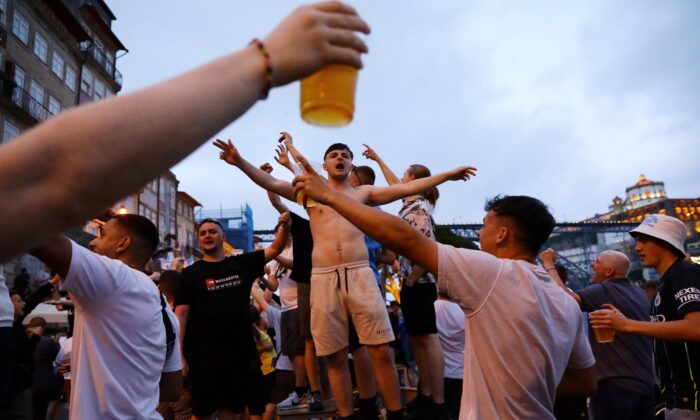 Manchester City fans in Porto ahead of the Champions League Final, in Porto, Portugal, on May 28, 2021. (Violeta Santos Moura/Reuters)
Europe

LISBON—Portugal’s government has come under fire from lawmakers for sending contradictory COVID-19 messages after allowing thousands of English soccer fans to party in Porto for Saturday’s Champions League final, despite coronavirus restrictions.

In the days leading up to Saturday’s final between Chelsea and Manchester City, big crowds of English fans, who were largely maskless and did not socially distance, took over Porto’s streets to drink and chant team slogans.

“The government and Porto’s mayor should apologize to the Portuguese, who, deprived of so much, are watching this disgrace in the midst of fighting the pandemic,” opposition leader Rui Rio wrote on Twitter.

However precautions were taken which meant all fans had to present a negative COVID-19 test on arrival in Portugal, which is on the British government’s “green” list allowing tourists to visit without quarantining on their return.

Some 16,500 fans were allowed into the Dragao stadium in Porto, upsetting locals who have been banned from attending matches for months. Many other English fans traveled to the city to support their teams from the sidelines.

“The way the Champions League final was organised gave a bad image of Portugal and will have unpredictable consequences on public health,” he added.

Last week, a police source told Reuters Portuguese authorities did not have enough time to fully prepare for the final as UEFA only announced it would move the event to Porto from Istanbul around two weeks ago.

Portuguese authorities decided to relax COVID-19 rules for the match last week, no longer requiring fans to stay in “bubbles” and lifting restrictions on movement.

“It is not understandable to allow an event [to take place] that is not allowed to the majority of the citizens of this country,” said Left Bloc leader Catarina Martins.

Some health experts now fear the Portuguese will be less willing to adopt coronavirus preventive measures.

Portugal’s northern region health authority on Sunday asked all those who got close to any Champions League celebrations to monitor for COVID-19 symptoms and reduce contact with others over the next 14 days.