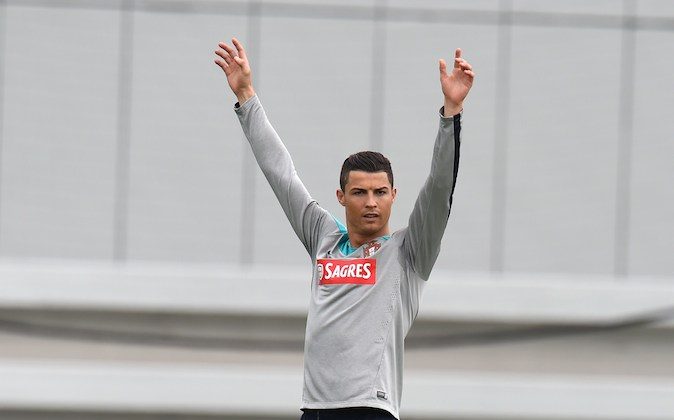 Portugal's Cristiano Ronaldo celebrates a goal during training June 4, 2014 in Florham Park, New Jersey. Portugal made a stop in the US for training and warm up games on their way to brazil for the World Cup. (DON EMMERT/AFP/Getty Images)
Soccer

Portugal and Mexico face off in a pre-World Cup friendly match on Friday, June 6.

The game will be broadcast on RTP 1 in Portugal.

The game will also air on TV Azteca 7 in Mexico.

In the United States, the game will be shown on Univision Deportes, ESPN2, and UniMás.

Live stream is available on RTP Internacional and Watch ESPN (subscribers only).

Portugal are sweating on the fitness of Cristiano Ronaldo.

The Real Madrid star and Portugal captain is back in training, but he is unlikely to feature in Friday’s match.

The FPF said Ronaldo was suffering from a “muscle injury on the back of his left thigh as well as left-leg patellar tendonitis.”

This is worrisome news for Portugal as Ronaldo has single-handedly carried Portugal through World Cup qualifying, most memorably during the qualifying play-off match against Sweden, where he scored 4 goals to see Portugal 4-2 through on aggregate.

Portugal’s Raul Meireles and Beto are battling thigh and leg issues respectively, while defender Pepe is also struggling to for fitness.

Conversely, Mexico are likely to field a full-strength side against Portugal.

Coach Miguel Herrera has stated previously that the team he picks against Portugal will also start against Cameroon in Mexico’s World Cup opener on June 13.

Given Ronaldo’s condition and Portugal’s injury woes, Herrera’s Mexico side has a good chance of finishing their World Cup preparations on a good note.