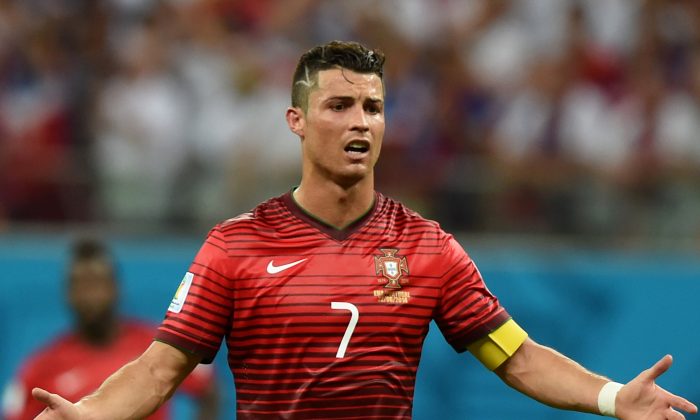 Portugal's forward Cristiano Ronaldo gestures during a Group G match between USA and Portugal at the Amazonia Arena in Manaus during the 2014 FIFA World Cup on June 22, 2014. (FRANCISCO LEONG/AFP/Getty Images)
Soccer

Portugal and Ghana will go head-to-head in a World Cup 2014 Group G match on Thursday, June 26.

The game will kick-off at 12:00 p.m. EDT at Estádio Nacional Mané Garrincha, Brasilia.

CUIABA, Brazil (AP) — Whether at international or club level, Cristiano Ronaldo’s goals, skills and mere presence has got his various teams out of many sticky situations down the years.

Yet even the world player of the year may have met his match at the World Cup, considering the size of the task he faces with Portugal on Thursday.

Arguably the most hotly contested group in Brazil reaches its climax with both qualification spots still up for grabs heading into the final round of fixtures in Group G.

Portugal and Ghana both need to win when they meet in Brasilia — but both know they are at the mercy of a match being played simultaneously more than 1,200 miles (1,900 kilometers) away, Germany vs. the United States in Recife.

With Germany and the U.S. on four points, a draw would put both teams through to the last 16. In that case, the outcome of the game between Portugal and Ghana, who are on one point, would not matter.

Portugal’s task is even harder because its goal difference is -4, much worse than the Germans (+4) and the Americans (+1).

Ghana, which has a goal difference of -1, has more hope. A victory in the Brazilian capital, combined with a win for Germany, could see it qualify at the expense of the U.S.

Conspiracy theories have gone into overdrive since Portugal’s last-gasp equalizer in the 2-2 draw with the United States, which left all to play for in the group. Cynics point to West Germany’s 1-0 victory against Austria in the 1982 World Cup and the 2-2 draw between Denmark and Sweden in the 2004 European Championship as examples of teams securing mutually beneficial results in games.

But the Portuguese only have themselves to blame for leaving the team in such a dire situation. Poor, even before Pepe’s silly red card for head-butting in an opening 4-0 loss to Germany, they also failed to play like a side ranked No. 4 by FIFA against the United States. Only Silvestre Varela’s header with 30 seconds left of five minutes of stoppage time kept them in World Cup contention.

“We’re probably just an average team. I’d be lying if I said we were a top team,” said Ronaldo, whose only noteworthy contribution in 180 minutes of action in Brazil was the perfect cross that set up Varela for his goal.

“Recently I haven’t been how I had hoped,” added the Real Madrid star, who has been nursing a left knee injury throughout the tournament.

Pepe, the Real Madrid center back, is available again after suspension.

Ghana has offered more in Brazil than Portugal, and could be considered unlucky to have just one point to show from its efforts after losing 2-1 to the Americans and drawing 2-2 against Germany.

The 2010 quarterfinalists will be without one of their best players, midfielder Sulley Muntari, and are expected to stick with the same attacking philosophy they have adopted so far.

“I always believe that the best way to defend is to attack,” Ghana coach James Appiah said after the Germany game.