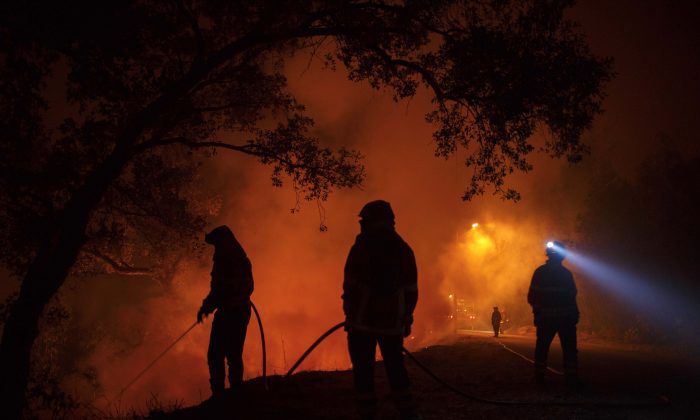 POMBAL, Portugal—Forest fires in Portugal killed 114 people last year. Before any blaze starts this year, elite firefighters are getting ready to strike back.

The government has doubled the National Republican Guard’s first strike firefighting units to 1,064 soldiers as part of a plan to shift the task to professionals from volunteers.

The fires in 2017 were the worst in recorded Portuguese history and led to the resignation of the interior minister and shook the government into action.

It has launched dozens of measures to address what experts say is the root cause of the annual summer fires in the eucalyptus forests, namely a decades-long abandonment of the country’s interior.

At the heart of the strategy, though, is the elite unit that aims to quickly put out fires before they burn out of control.

During a training day on Friday, July 13 at an air base in central Portugal soldiers rushed to their helicopter and packed gear into the craft’s specially-built basket in the second drill of the day designed to perfect their reaction times.

“We are still few but the significant increase in our force’s numbers will substantially improve our effectiveness,” Capt. Joao Fernandes told Reuters during a visit to the base in Pombal, 170 km (105 miles) north of Lisbon.

This weekend the government held an extraordinary cabinet meeting in the interior where the fires struck and unveiled tax breaks, investments, and other measures to help clear the land of flammable undergrowth.

It also handed over 80 new four-by-four trucks to the firefighters, which are used to reach fires by land or for patrolling.

But it could take years for long-term measures to take effect and until then the rapid reaction firefighting teams spearhead the country’s efforts.

This year authorities opened 17 new bases mainly in the fire-prone north, bringing the number to 39.

Fernandes commands six of those bases. His forces are split into teams of five that are ready to scramble their helicopters any time.

When a call comes a team is sent from one of the bases, depending on where the fire is. The helicopter will drop the men through the smoke to the ground where they can unpack a giant red water bucket and hook it to the helicopter’s underside.

While it flies back and forth dropping water the unit, armed with backpacks of water, hoes and broom-like sticks with hard cloth, beats, hacks, and stamps the flames.

“A team with such simple tools does an excellent job,” said Fernandes of the tactic to put out fires while they are small.

But the job is not for everyone. Recruits are asked to join from the ranks of the 21,000-strong National Guard and must pass physical, medical, and psychological tests and do a six-week training course.

Sergeant Eduardo Manata, who leads the teams from Pombal, said the job is extremely demanding and many drop out. None, however, have died fighting fires thanks to their training.

Manata recalls going on up to 10 missions a day in the past. But this summer has been unusually wet, unlike last summer, which was dry and hot.

“For now, it is quiet,” said Fernandes.