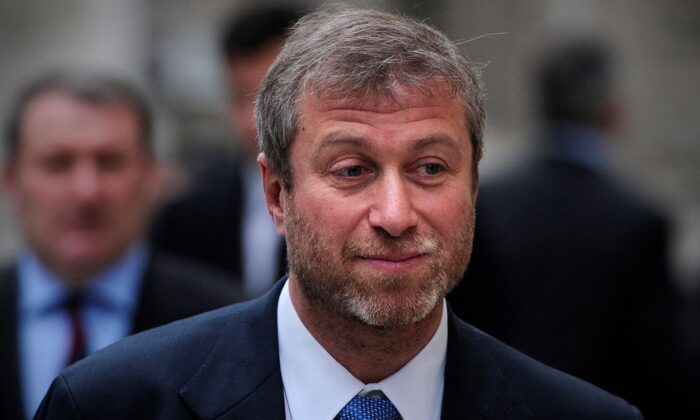 Chelsea Football Club's Russian owner Roman Abramovich is pictured during a break in proceedings at the High Court in central London, on Oct. 31, 2011. (Carl Court/AFP via Getty Images)
Soccer

LISBON—Portugal said on Thursday that sanctions imposed by Britain on billionaire Chelsea soccer club owner Roman Abramovich, a Portuguese citizen since last year, did not apply outside the United Kingdom due to its exit from the European Union.

In a statement sent to Reuters, the justice ministry also said EU sanctions against Russian oligarchs due to Moscow’s invasion of Ukraine do not include scrapping someone’s citizenship.

Russian-born businessman Abramovich was granted Portuguese citizenship in April 2021 based on a law offering naturalization to descendants of Sephardic Jews who were expelled from the Iberian peninsula during the mediaeval Inquisition.

There is little known history of Sephardic Jews in Russia, although Abramovich is a common surname of Ashkenazi Jewish origin.

The Portuguese prosecutor’s office in January opened an investigation into the granting of citizenship to Abramovich.

Britain, which voted to leave the EU in a 2016 referendum, imposed sanctions on Abramovich and Igor Sechin, the chief executive of Russian oil giant Rosneft, hitting them with asset freezes and travel bans because of their links to Russian President Vladimir Putin.