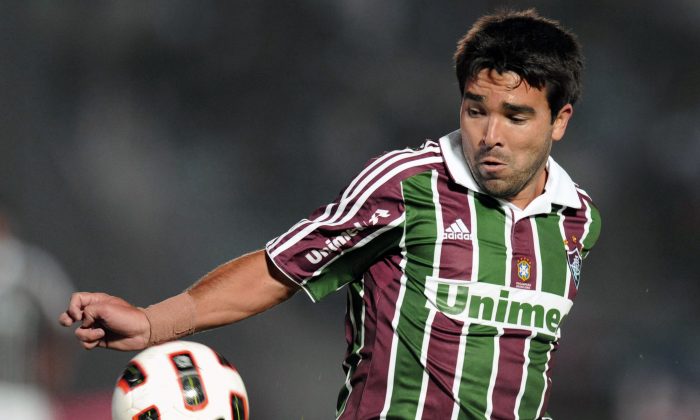 Fluminense's Deco tries to control the ball during their Copa Libertadores match against Nacional at Centenario stadium in Montevideo on April 6, 2011. (PABLO PORCIUNCULA/AFP/Getty Images)
Soccer

Deco, the Brazilian-born Portuguese midfielder, retired in August 2013, and will feature in this testimonial match.

The match will feature the Porto side of 2004 and the Barcelona side of 2006, two teams that he played in and won the UEFA Champions League title with.

Deco has won a number of titles for different clubs, and counts the UEFA Club Football Player award in 2004 and the 2006 FIFA Club World Cup Golden Ball among two of his best personal accolades.

“There were more than 500 games at clubs like Porto, Barcelona, Chelsea and Fluminese. I had the pleasure of representing Portugal for 75 times and throw in some of the best competitions in the world as the Champions League, Euro and World,” Deco, now 37-year-old, said.

“After thousands of miles in the legs, numerous trips, joys and titles came time to return the affection of the fans. It’s time to say goodbye to the pitch with the people of my heart’s club. I’ll celebrate at Dragon Stadium with my colleagues, family, friends and all dragons,” he added.