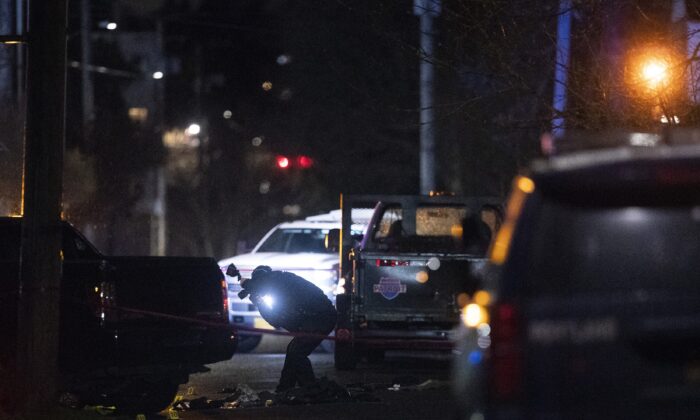 Portland police respond to a shooting in the area of Normandale Park in Portland, Ore., on Feb. 19, 2022. (Beth Nakamura/The Oregonian via AP)
Crime and Incidents

A Feb. 19 shooting in Portland, Oregon, that left one person dead and five injured started with a confrontation between armed protesters and an armed homeowner, police said on Feb. 20, while there were reports alleging that members of Antifa were involved.

According to a statement from the Portland Police Bureau, officers responded to a call near Northeast 55th Avenue and Hassalo Street in the Rose Park neighborhood at 8 p.m. local time and found a woman who had been shot and killed.

“The scene was extremely chaotic, and a number of witnesses were uncooperative with responding officers,” the statement reads. “Most people on scene left without talking to police. Detectives believe a large number of people either witnessed what happened or recorded the incident as it unfolded. This is a very complicated incident, and investigators are trying to put this puzzle together without having all the pieces.”

Three women and two men who were injured in the incident were taken to nearby hospitals, according to officials.

Local media outlets reported that people were gathered in the area to protest the death of 22-year-old Amir Locke, who was shot and killed earlier in February in Minneapolis.

“We do know one thing for sure—our community is dealing with the sadness of another senseless act of gun violence,” Wheeler wrote.

Journalist Andy Ngo, who has been documenting leftist rioters and Antifa throughout the United States, claimed on Twitter that the shooting occurred when armed Antifa groups were gathering “for a direct action.” While Portland authorities didn’t say whether the anarcho-communist group was involved, Ngo and others posted videos and photos showing individuals on the scene dressed in “black bloc”-style garb, which is typically employed by Antifa.

In recent years, Portland has become a magnet for riots and leftist demonstrators, which came to a boiling point during the summer of 2020. Like many other big U.S. cities, Portland has seen a significant spike in murders and shootings over the past two years, a phenomenon that police groups have said is triggered by a rise in anti-police sentiment and lax enforcement of laws by Portland’s district attorney.

The Portland Police Bureau said authorities didn’t provide any information about a motive or who might be responsible.