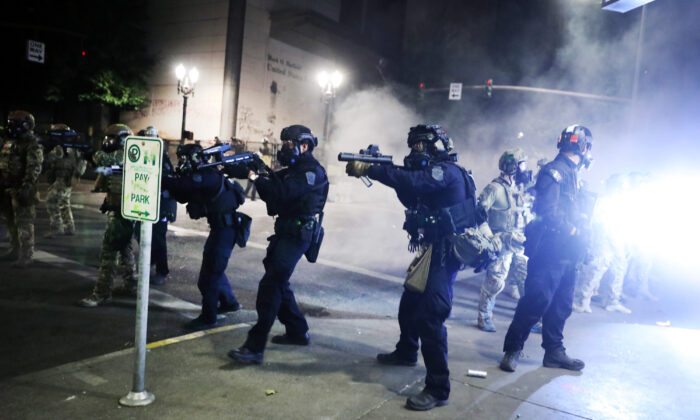 Federal police face off with protesters in front of the Mark O. Hatfield federal courthouse in downtown Portland as the city experiences another night of unrest in Portland, Oregon, on July 27, 2020. (Spencer Platt/Getty Images)
Crime and Incidents

Violent crime in Portland, Oregon, which saw mass protests over the death of George Floyd in 2020, has surged over the past three years, according to data compiled by researchers for the California Partnership for Safe Communities.

Minneapolis is the second highest at 104 percent, while Atlanta is third at 54 percent.

Victims and suspects of homicides and shootings in Portland are primarily African-American (47.2 percent) and Caucasian (36.5 percent) men, according to the report.

The overall mean age of victims and suspects is 32.9, according to the report, and about 78 percent are between the ages of 18–44.

Victims tend to be slightly older than suspects, researchers noted, while roughly 70 percent of victims and suspects had prior criminal justice system involvement.

The year 2019 marked a breaking point in Portland homicides when such violent crimes surged to 36 in a year compared to 26 in 2018. It has seen a steady increase in homicides since then, with 57 reported in 2020 and 88 reported in 2021. Previously, the number of homicides had remained below 26 with the exception of 2004 when there were 29 homicides.

Meanwhile, non-fatal shootings more than tripled from 2019 to 2021.

“Homicides in Portland fall into many categories of circumstances, but the largest are ongoing personal disputes and instant disputes,” the report states. “This is closely followed by violence resulting from group/gang members engaged in ongoing group-related conflicts.”

Just under half of all homicides in Portland from January 2019 to June 2021 involved group or gang members as either victims or suspects or both (41–78 percent).

More than half of the 88 homicides by shootings in Portland from January 2019 to June 2021 involved group or gang members as either victims or suspects or both (52–85 percent).

Following the release of the report, Portland Mayor Ted Wheeler said in a statement that it confirms the “unfortunate reality of what we already knew—that gun violence is on the rise in Portland and that it is being driven by a very small percentage of our population.”

Portland also noted that the report will help shape how the city uses resources aimed at combating shootings and will help ensure tailored investments that will have “as much impact as possible” in reducing such violence.

“I look forward to incorporating this important data and the recommendations from California Partnership into our future efforts to address gun violence, including Safe Summer PDX and beyond,” Wheeler added.

Portland saw near-constant mass protests and riots in 2020 following the death of Floyd in Minneapolis and those protests, which often turned violent and saw businesses looted and burned, continued into early 2021.

Meanwhile, police struggled to quell the violence in the wake of $27 million being cut from police budgets in 2020.