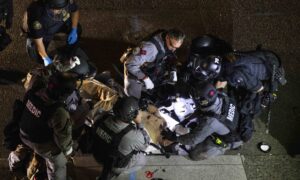 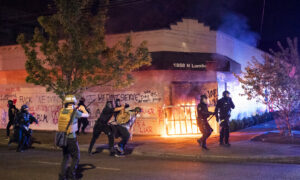 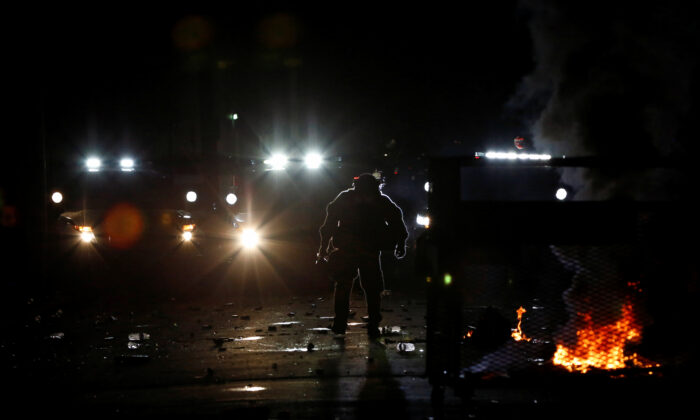 A police officer removes a barricade erected by rioters in Portland, Ore., in an Aug. 23, 2020, file photograph. (Terray Sylvester/Reuters)
Crime and Incidents

Rioters in Portland on Monday night broke into a business and started a fire inside during a march to the apartment building where Mayor and Police Commissioner Ted Wheeler lives.

Video footage showed rioters using baseball bats to shatter glass windows and doors to gain access to a dental clinic before lighting a fire inside.

Graffiti sprayed on the business said “This is the language of the unheard” and “Cops & Klan go hand in hand.”

In a bid to “deescalate the situation,” police officers “stayed out of sight and monitored the situation from the distance,” the Portland Police Bureau said in an incident summary.

But the continued mayhem triggered a response. The clinic is situated in a large apartment building, prompting fears the fire could spread to residences and leading to the declaration of a riot.

Officers moved in and dispersed the crowd so that firefighters could respond and extinguish the fire and others started by rioters.

Clashes between the officers and rioters went into the early hours of Tuesday.

Nineteen people were arrested for charges including riot, carrying a concealed weapon, and attempted assault of a peace officer.

Many of the charges will likely be dropped under a recent policy change by the Multnomah County District Attorney’s Office.

Arson investigators are looking for the suspect who started the fire, police said.

Oregon Gov. Kate Brown and Wheeler, both Democrats, rejected renewed offers from the federal government for assistance in quelling the riots, which have kept going virtually unabated since May 28.

Brown unveiled a plan on Sunday that saw state troopers rushing back to Portland and asked for help from law enforcement in nearby counties. Sheriffs and a police chief who were asked to help, though, said they would not send personnel to the city.

Asked what he was doing to end the violence, Wheeler told reporters on Sunday that he and other City Council members have committed to a number of fundamental reforms that demonstrators have asked for and pointed to a 19-point plan that he released that includes actions like reducing some of the police bureau’s programs “that were seen as biased by many people in the black community.”

He called on people to stop being violent and demonstrate peacefully.

The briefing came just hours after a man who rallied with pro-President Donald Trump supporters was shot dead, possibly by a member of the far-left Antifa group.

In light of the killing, eight groups, including the Council on American-Islamic Relations’ Oregon chapter, and the Portland Democratic Socialists of America, called on Wheeler to resign.

The organizations said that Wheeler “has offered no meaningful solutions in response to protesters’ demands to curb the racially hostile and brutal practices of Portland Police and has demonstrated an unwillingness to rein in the PPB.”

Trump on Monday told reporters in Washington that the federal government could quell the unrest “in approximately one hour” if officials ask for help.

“But the mayor refuses, perhaps for political reasons. I don’t know why it’s good for him to have a city that’s falling apart and that’s under siege now for 94 days. But, really, it’s been under siege for years, if you know Portland,” he said.