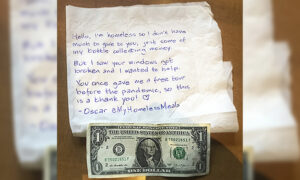 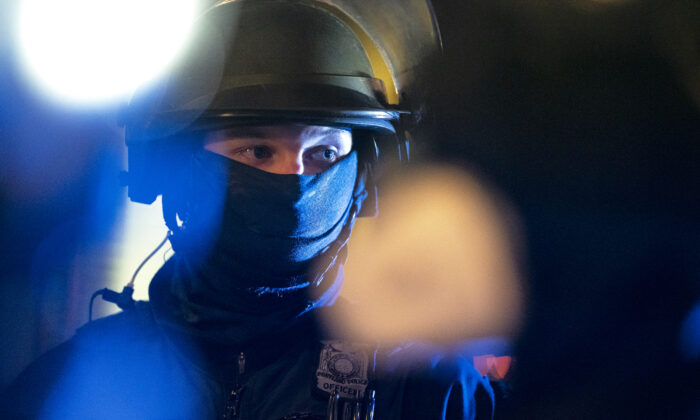 A Portland police officer monitors a group of protesters in Portland, Ore., on Oct. 7, 2020. (Nathan Howard/Getty Images)
Crime and Incidents

Authorities said dozens of protesters marched towards the Portland Police Association (PPA) office on Monday, before vandalizing the building and setting fire to a nearby billboard.

The Portland Police Bureau said that shortly after 10 p.m., around 75 members of a group marched from a park in North Portland towards the PPA office building “with support vehicles following and blocking traffic.”

Authorities said that when the group arrived, a sound truck gave three announcements requesting that protesters stop blocking traffic, “be courteous to your neighbors,” and not vandalize buildings.

“The group immediately began spray painting the PPA office,” the police said, adding that some protesters climbed onto roofs of nearby businesses and used signs to block traffic and occupied a roadway.

At one point, an unidentified individual set fire to a nearby billboard.

“The fire burned the attached advertisement as the rest of the structure appeared to remain unaffected by the fire. The fire appeared to extinguish itself,” the police said.

Oregon Public Broadcasting reporter, Sergio Olmos, shared information about the incident in a series of tweets. This included a photo of a handful of individuals, some wearing helmets, standing by the billboard, which featured the slogan: “Wake up America! Thank you Portland Police Bureau.” The photo also showed what appeared to be five paint bomb splotches on the billboard. A brief video Olmos shared in subsequent tweet shows the ad burning while loud music is heard in the background and then some yelling.

Portland police issued another warning, calling on the crowd to stay on the sidewalk, stay off buildings, and “not light fires.” They threatened to arrest people engaging in criminal activity and warned that they may deploy crowd control measures, including batons and tear gas.

The crowd dispersed around midnight, with police saying no arrests were made.

The PPA building was earlier the target of protests, with police in August declaring a riot after the office was defaced with graffiti and a fire was set nearby.

Between May 29 and Oct. 18, the Portland Police Bureau declared 28 riots and made 937 arrests, excluding arrests made by Federal officers.

Meanwhile, gun violence in the area surrounding Portland Police’s East Precinct, which was the epicenter of anti-police protests and riots, has surged by 114.9 percent year-over-year, recent figures show. So far this year, as of Oct. 15, there were 331 shootings in the East Precinct, compared to 154 in the first ten and a half months of 2019.