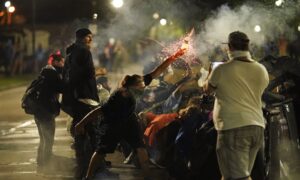 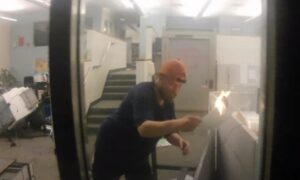 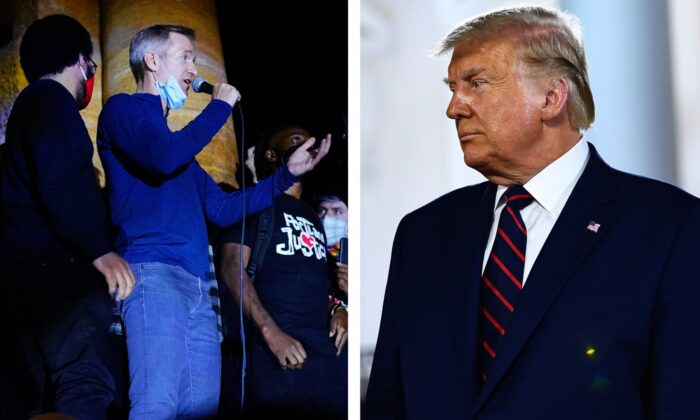 The mayor of Portland denied an offer from President Donald Trump to provide federal assistance to Oregon’s largest city as nightly protests that are often declared riots continue.

Ted Wheeler, a Democrat, wrote a letter (pdf) to the president on Friday after he was asked several times throughout the week to accept federal help as the city enters its 94th night of protests.

“Yet again, you said you offered to aid Portland by sending in federal law enforcement to our city. On behalf of the City of Portland: No thanks,” Wheeler wrote in the Aug. 28 letter.

Wheeler said “tens of thousands of Portlanders have peacefully protested and marched for the noble cause of fixing our broken criminal justice system” and urged federal law enforcement officers to “stay away.”

“We don’t need your politics of division and demagoguery. Portlanders are onto [sic] you. We have already seen your reckless disregard for human life in your bumbling response to the COVID pandemic. And we know you’ve reached the conclusion that images of violence or vandalism are your only ticket to reelection,” the mayor wrote.

“There is no place for looting, arson, or vandalism in our city,” he continued. “There is no room here for racist violence or those who wish to bring their ideology of hate into our community. Those who commit criminal acts will be apprehended and prosecuted under the law.”

Wheeler wrote the fiery letter to the president after Wisconsin Gov. Tony Evers, a Democrat, accepted help from the Federal Government earlier this week and Kenosha protests have since remained peaceful. Trump also asked Portland to request help, “if lives are endangered.”

Kenosha has been very quiet for the third night in a row or, since the National Guard has shown up. That’s the way it works, it’s all very simple. Portland, with a very ungifted mayor, should request help from the Federal Government. If lives are endangered, we’re going in!

Since the death of George Floyd, protests erupted nightly in Portland, and more than a dozen have been declared as riots, according to police. The situation has attracted nationwide attention, particularly when federal officers and rioters clashed repeatedly last month.

Last night, Portland police were forced to declare another protest a riot after a fire was set again to the offices of the Portland Police Association (PPA) building, traffic was blocked, objects including rocks were thrown at police officers, fires were set to multiple dumpsters on the road, threatening buildings.

“Officers responded and moved the rioters away from the building so the fire could be extinguished,” the Portland Police Bureau wrote in a statement. “During the response, officers used crowd control munitions. However, no CS (tear) gas was deployed.”

Wheeler said Friday he is confident Portland authorities can resolve the situation and blamed Trump in his letter for making the situation worse after he sent federal help last month.

“Your offer to repeat that disaster is a cynical attempt to stoke fear and distract us from the real work of our city,” the mayor said. “In Portland, we are focused on coming together as a community to solve the serious challenges we face due to systemic racism, a global pandemic and an economic recession.”

Oregon Gov. Kate Brown also said earlier this week she would not send the National Guard to help deal with continued unrest in Portland, hours before another riot took place.

A group of about 150, many wearing helmets, gas masks, and body armor and carrying shields, descended on City Hall on Tuesday after 9:30 p.m. Some smashed windows and entered the building, including people marked as “press,” while others lit a fire outside.

Trump wrote a statement following the riots that his administration wants Brown and Wheeler, “to call up the National Guard like should have been done 3 months ago.”

“They must stop calling these anarchists and agitators ‘peaceful protesters.’ Come back into the real world! The Federal Government is ready to end this problem immediately upon your request,” he continued.