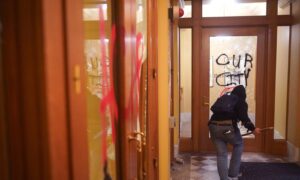 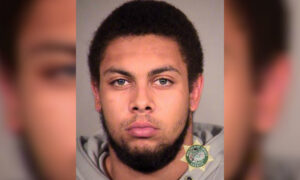 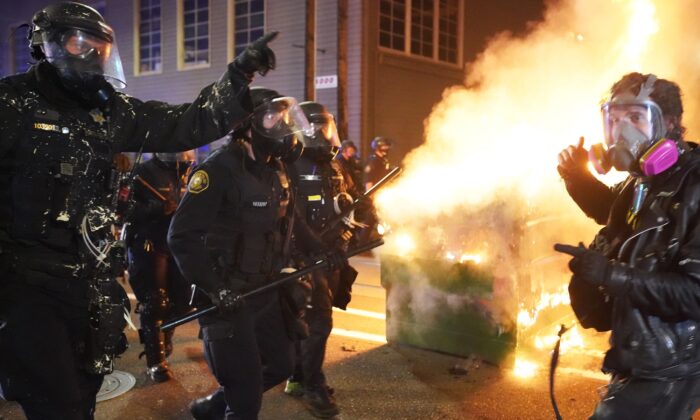 Portland, Oregon, Mayor and Police Commissioner Ted Wheeler on Aug. 26 blamed continuing violence on “a few dozen individuals” who he said are hijacking the city’s proud tradition of protesting.

“They’re intent on creating mayhem and attacking and harming people, not just property. That’s a line that we can’t allow our community to cross. Not anymore. Enough is enough. It’s time to rise up and take immediate steps to repair and beautify our city,” Wheeler said in a rare virtual press briefing.

The Democrat and other city and state officials have failed to quell the riots in Portland, which have continued nearly nonstop every night since May 28.

Almost 100 people have been arrested since Aug. 23, boosting the total number of arrests in recent months past 700.

Wheeler said he would meet with Portland Police Bureau officials to discuss what reforms they could put on the table to “acknowledge that while the men and women of our police borough work hard, they can do better, all of us can, that they’re an evolving organization, and that they will join us, that they will rise up, that they will link arms with all of us who are interested in addressing the issues that people in this community had been asking for, not just during the last three months of demonstrations, but what they’ve been asking for for a long, long time.”

While acknowledging that businesses are struggling to operate because of the unrest, Wheeler said the portrayal of Portland “as a dark dystopia with nonstop violence is a lie.”

He urged demonstrators to remain peaceful and called for others in the community to step up, denounce the violence, and demand an end to the unrest, similar to what Police Chief Chuck Lovell said last week.

“In order to do that, I need to work with the Police Bureau to, on one hand, create a respectful place for nonviolent demonstrations to take place, and on the other hand, enact strategies that make it clear that we are going to arrest and hold accountable that small group of people who are engaged in the nightly violence,” he said.

“It has gone on way too long.”

“Frankly, I have not been focused enough on the two issues that are the most important to the City of Portland. And, right now, that is ending the nightly violence and getting our community back on its feet. And number two, it’s about economic recovery, both for our households and our small businesses,” he said. “I need to focus like a laser beam on those two issues.”

The mayor and his aides have been meeting regularly with different groups of demonstrators, who have presented many different demands, though he didn’t specify any of them.

“I’ve met with even some demonstrators who are described as being more on the extreme side of the spectrum,” Wheeler said. “I had a meeting last week where a group of people, frankly, just shouted expletives at me.”

“At this particular moment, nobody’s made a good case for me that a complete abolition of funding for policing will enable somebody who calls 911 at 3 in the morning to get an actual response,” he said.

“We still have that responsibility and that duty to help our community be safe.”

Wheeler and other City Council members voted in June to cut at least $15 million from the bureau’s budget, and they barred police from working with federal officers.

Wheeler wasn’t asked about whether he would welcome National Guard assistance; his office hasn’t responded to requests for comment about that matter.

President Donald Trump and acting Homeland Security Secretary Chad Wolf have asked Oregon Gov. Kate Brown to allow the deployment of the National Guard to the city, but she refused.

State troopers withdrew earlier this month following a two-week stint, pointing to a new policy that sees a number of charges relating to demonstrations presumptively dropped.

FBI Special Agent in Charge Renn Cannon, who runs the Portland field office, told the Associated Press on Aug. 26 that he’s reassigning agents from the fraud and organized crime teams to focus on the rioting.

Officials are “making the assessment that we should be trying to do a little more than we have, because the cumulative effects and the nature of the problem indicate that the community needs help,” Cannon said.

The FBI last week asked for the public’s help in identifying 10 people who broke into the Multnomah County Justice Center on May 29, the first ultraviolent riot.

Hours after Wheeler’s Aug. 26 briefing, roughly 200 people marched to the Immigration and Customs Enforcement Building in south Portland. They vandalized and disabled security cameras and hurled projectiles at federal officers who emerged to protect the facility.

Portland police officers dispersed the crowd even as rioters threw rocks at them, according to the Portland Police Bureau in an incident summary.

Clashes lasted into the early hours of Aug. 27.

Ten people were booked, including two Nevada residents, on charges including interfering with a peace officer, carrying a concealed weapon, and disorderly conduct.

Under a new policy from Multnomah County District Attorney Mike Schmidt, most charges likely will be dropped.