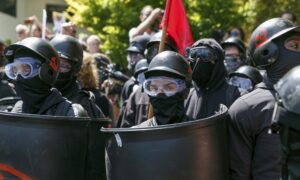 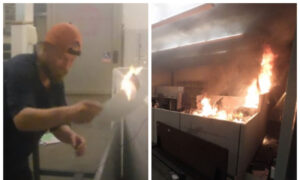 Portland Man Charged With Setting Fire to Justice Center, Faces Up to 20 Years
0 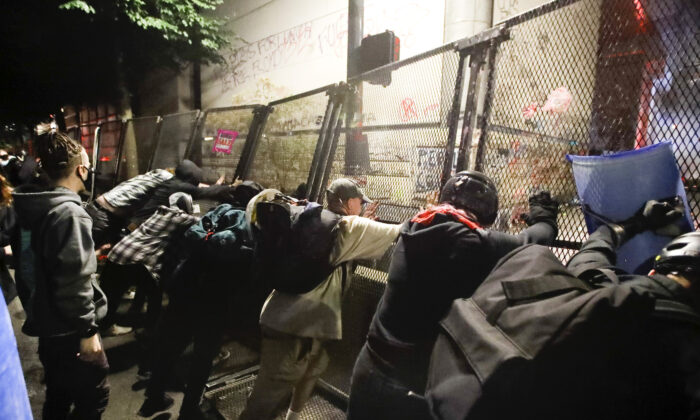 Portland Fines US for Fence Obstructing Street Outside Federal Courthouse

The U.S. government will be fined a maximum amount of $500 for every 15 minutes it maintains a fence around the federal courthouse in Portland, Oregon, which protesters have attempted to breach during nightly ongoing riots, city officials said.

“As of yesterday, the federal government owes us $192,000 and counting,” City Commissioner Chloe Eudaly, who oversees the Portland Bureau of Transportation (PBOT), said in a July 28 statement. She added that the city intends to collect.

The fence was initially erected around the Mark O. Hatfield U.S. Courthouse last week to try to de-escalate tension between federal agents and rioters who have launched projectiles and made attempts to breach and set fire to the courthouse.

The PBOT “filed a cease-and-desist letter” last week demanding that the federal government remove the “unauthorized fence,” according to the statement. Eudaly said the fence is obstructing city streets.

Eudaly says she’s “committed to doing everything in [her] power to end this federal occupation and move forward with the reckoning of our community with racial injustice and our efforts. To transform our approach to surveillance and public safety.”

Democratic city and state leaders, including Eudaly, accuse federal agents of escalating violence in the city. But according to video evidence and officials, the officers and agents appear to be reacting to criminal actions by rioters, including damaging federal property and assaulting law enforcement personnel.

Federal officials previously announced that no response is necessary if crowds stay away from the courthouse and the new fencing. Violent demonstrators have repeatedly set fire to and attempted to damage the courthouse before the barrier was erected, and recently, protesters have focused their energy on using saws, ropes, chains, hammers, and other tools to pull down the fence.

On July 27, a crowd of several hundred people blocked streets around the courthouse, a common occurrence, and spent hours yelling, chanting, banging on the fence, and throwing objects at the building. Just before midnight, rioters began launching mortar-style fireworks, and some began climbing over the fence. Others used umbrellas and shields to cover a person trying to cut through the barrier.

It also comes after multiple warnings to leave the area. #PortlandRiots pic.twitter.com/MNNR9owrkY

Only a few protesters have shown violence, Eudaly said in her statement, and their actions shouldn’t negate the rights of others to exercise their freedom of speech and to peacefully assemble.

“The response of law enforcement should be proportional to the infractions. Indiscriminately tear-gassing and firing impact munitions at thousands of peaceful protesters is not a proportionate response,” Eudaly said.

Homeland Security acting Secretary Chad Wolf said at a press conference earlier this month that the department fully supports and will protect those who wish to peacefully protest in Portland, but what officers are seeing every night “is the complete opposite.”

The unrest in Portland follows a daily pattern, according to Deputy Director of the Federal Protective Service (FPS) Richard Cline. From roughly 6 p.m. to 11 p.m., peaceful protesters assemble and demonstrate, but after midnight, violence organized by agitators flares. He says the federal response to the violence has been wrongly described as targeting peaceful protests.

“What is occurring in Portland in the early hours of every morning is not peaceful protesting. These individuals are organized, and they have one mission in mind: to burn down or to cause extreme damage to the federal courthouse and to law enforcement officers,” Wolf said.

“We see them planning their attacks, and yet the city of Portland takes little to no action to stop or disperse this crowd,” he added. “These individuals carry lasers, baseball bats, explosive fireworks, metal pipes, glass bottles, accelerants, and other weapons all targeting federal facilities and federal law enforcement.”

Rep. Earl Blumenauer (D-Ore.) has demanded Wolf’s resignation, stating that “any person who oversees the kidnapping of protesters and the violent occupation of American cities has no place in our government,” referring to Wolf.

The city will be closely monitoring state and federal action and provide support wherever possible, Eudaly said.

Normally, the city “would send a maintenance crew or contractor” to remove an obstruction such as the fence, “but I will not send workers into harm’s way,” she said.