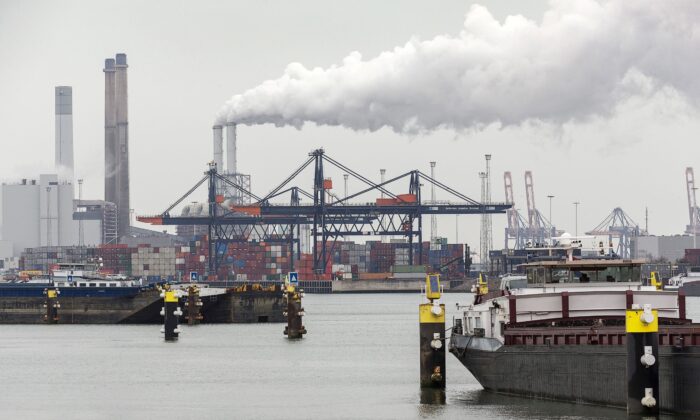 A container terminal is seen in the port of Rotterdam, the Netherlands on March 21, 2016. (Michael Kooren/Reuters)
Economy

AMSTERDAM—Freight volumes in the port of Rotterdam increased 15 percent on a yearly basis in the third quarter as international trade continued to recover from its COVID-19 slump, Europe’s largest sea port said on Tuesday.

Trade flows to and from Rotterdam have been almost 9 percent higher in the first nine months of the year, with strong growth in almost all segments, the port said.

“These figures show that the economy is continuing its upward path. Factories, businesses and logistics are operating flat out again to meet increased demand,” the port’s Chief Executive Allard Castelein said.

As a consequence, the number of containers arriving in Rotterdam increased faster than the total amount of goods shipped, as transport of relatively heavy, low-value goods declined.

The economic recovery also pushed up demand for bulk goods such as iron ore, used to make steel, crude oil, and oil products.

Transport of coal almost doubled in the first nine months of the year, as the supply of wind power and gas was not nearly enough to cover Europe’s increasing energy needs.