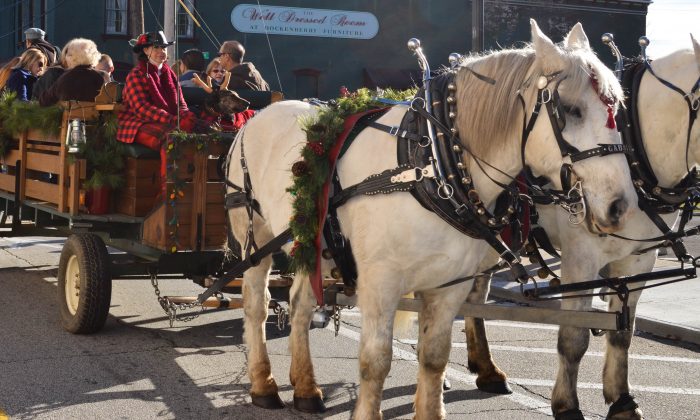 PORT JERVIS—The River City brought the holiday to town in grand fashion with an appearance of Santa and Mrs. Claus at the tree lighting on Nov. 28 and Christkindlmarkt on Nov. 29.

Santa held court for a long line of children from babies to middle schoolers. Justin Paduani brought his whole family—Jaylyn, Alicia, and his wife Vilanette. “We bring them down here every year. We like having fun.”

Mayor Kelly Decker called everyone over near a large live pine at the park. As the children sang Jingle Bells, the tree lit up with golden lights. “It’s a wonderful night having Santa and Mrs. Claus and to see all the kids’ smiling faces. It brings the spirit of the holidays home.”

The next day was full of sun for the German-themed Christkindlmarkt on Front Street. Booths lined the street and filled a large tent with holiday decorations and gifts. There were gifts for every taste.

On the street, Sam Cohen sold unicorn, my little pony, and Spider Man balloons and novelties.

Williams Candle and Gift Shop showed handcrafted wrought iron centerpieces. “We cut it, bend it, weld it, paint it, and then my wife decorates them up,” said Rich Williams.

Baskets by GUM—the name comes from the last names of the three female proprieters, Gregory, Ulbrecht, and Myers—sold  hand-made rattan baskets. “We took lessons and continued to make them until there were so many in the house that we had to do something.”

Steve Webber, who is not Amish, makes relishes and conserves from authentic Amish recipes. “We have relishes, pickles, pickled beets, plenty of jams, and fruit butters. We have no-sugar-added jams.”

Musicians in costume braved the cool air in traditional Tyrolean shorts and knee socks and entertained the crowd with classic Christmas melodies.

KV Carriage, a horse-drawn carriage pulled by majestic white Percherons took people through the city. A Christmas angel strolled through the market with a basket. A merry old man accompanied by Mrs. Kane displayed a license with the name of Santa Claus.