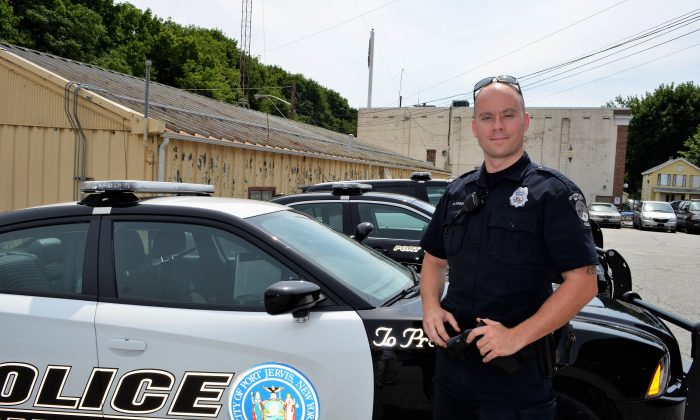 PORT JERVIS—Two calls came in rapid progression to the Port Jervis Police Department on July 21. They alerted the authorities to a man who dangled one leg over the bridge railing about 35 feet above the Delaware River between Port Jervis and Matamoras.

One of the callers yelled out to the man from her car as she drove across the bridge. “Are you alright?” He said, “No.”

The supervisor on duty, Sgt. Kevin Moscatiello, had mostly younger officers on that shift. He felt there was one man on duty that day best suited for this situation: Officer Andrew Haniuk.

“He’s an excellent officer,” Moscatiello said of Haniuk. “I like to send my most experienced officers on a call to the scene like this.”

When he arrived on the bridge, Haniuk put lights on his patrol car to divert traffic in case something tragic were to happen. He called out to the young Hispanic man, who now had both legs over the rail.

“He didn’t respond to me at first,” Haniuk said. “He was just kind of leaning there, looking down.”

Haniuk knew him. “I recognized him because I had dealt with him before.” Haniuk began to talk with the man in a very calm, natural way. “Hey, man. Remember me?” he said as he approached.

The man turned around very slowly and hesitantly looked at the officer. Haniuk could see the man was crying.

Do you mind if I help you again this time? Can you just come down, please, off that banister?
— Officer Andrew Haniuk, Port Jervis Police Department

Haniuk continued to talk in an easy, laid-back way. “You know, I helped you last time. Do you mind if I help you again this time? What can we do for you? Can you just come down, please, off that banister?”

Haniuk brought him into his air-conditioned patrol car, away from the rail. Haniuk continued the conversation. The young man had troubles where he lived in West End. He didn’t want to live anymore. He just wanted to jump off the bridge.

Haniuk told him he had a lot to live for. The officer said the man could come in anytime to talk to an officer if he needed help.

“We are always here. Anybody here would be more than willing to help him,” Haniuk said.

The patrolman drove the man to Bon Secours Hospital where he was being treated for post-traumatic stress disorder. His name has been withheld per HIPAA confidentiality guidelines.

Haniuk says his calm way of approaching these extreme situations comes naturally. “It’s just what we do.” He received training, called Verbal Judo, for such situations while studying at the police academy.

People have jumped from the Mid-Delaware Bridge in the past. The river can run from four to 20 feet deep, depending on the time of year.

From his experience as an eight-year veteran on the force, Haniuk said people can be driven to suicide for many reasons. “We have a lot of mental health issues throughout the city, with drugs and other problems that people have in their lives.”

Haniuk comes from a family of police officers, including his father. He formerly worked for the New York City Department of Environmental Protection, which protects the watershed, reservoirs, and aqueduct system that flows into New York.

Moscatiello expected such results from Haniuk. “That’s his niche, his forte. He can talk with anybody, and he’s got a very likable personality.”

A tragedy was averted on July 21 by a seasoned officer’s gentle approach to a troubled man.