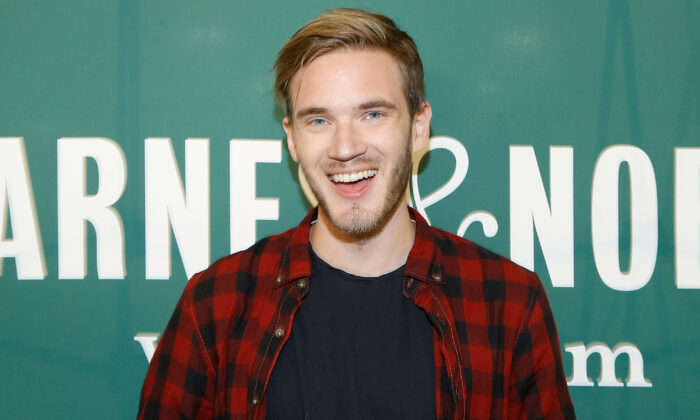 Popular YouTube star PewDiePie was censored from China’s largest online community after he took a stab at the Chinese regime’s sensitivity about the ongoing Hong Kong protests, while mocking American companies that have curbed free speech to appease the regime.

In a video on Oct. 16, PewDiePie, whose real name is Felix Arvid Ulf Kjellberg, took aim at the National Basketball Association (NBA) and U.S. video game company Blizzard Entertainment for putting profits over free speech in their handling of the Hong Kong issue.

PewDiePie is the second most popular YouTube channel, with more than 101 million subscribers.

Soon after the video, all information about the Youtuber disappeared from China’s largest internet forum Baidu Tieba, a platform similar to Reddit. The forum is hosted by Baidu, China’s leading search engine.

“Someone from NBA tweets something saying I support Hong Kong and then NBA is like—oh god we need Chinese money, so … it just spirals out of control,” Kjellberg said in the video.

Hong Kong has become a thorny issue for Beijing since mass protests erupted in June against the regime’s growing encroachment into the city.

Morey quickly deleted the tweet, and later apologized for any hurt caused by the message, while the NBA issued a statement, saying it was “regrettable” that the tweet deeply offended Chinese fans.

These gestures were not enough to fend off the swift backlash from China. All of the NBA’s official Chinese partners suspended ties with the league, while the league’s Chinese broadcast partners pulled airings of two exhibition games held in China.

“Obviously China is like that one person on Twitter that can’t take any criticism and just blocks everyone,” the Swedish YouTuber remarked.

NBA Commissioner Adam Silver later defended Morey’s right to express his view on Hong Kong, but noted that it was not the league’s job to regulate what players, employees, and team owners say. Silver also said Chinese authorities had pressed them to fire Morey over the issue.

Meanwhile, several people in the league, including Golden State Warriors coach Steve Kerr, Rockets star James Harden, and LeBron James from Los Angeles Lakers, have declined to come out in support of Morey. James, in particular, drew heavy criticism for dismissing Morey as being “misinformed” about the situation.

A similar episode took place when Blitzchung, a Hong Kong-based professional gamer, shouted “Stand with Hong Kong” in live broadcast after winning an esport tournament. In response, Blizzard suspended the player for a year, revoked his competition prize money, and fired two hosts who expressed sympathy for the Hong Kong pro-democracy protesters during the live stream.

Blizzard later reduced the Blitzchung’s punishment to half a year and returned his prize money amid mounting public criticism.

“Because Blizzard needs Chinese money obviously,” Kjellberg said, noting that “at the end of the day the [businesses’] goal is to make money.”

“They don’t care about freedom, and unless people push back at companies, they’re not gonna do anything,” he continued.

The Swedish Youtuber also displayed a series of memes satirizing the Chinese Communist Party, including those likening Chinese leader Xi Jinping to Winnie the Pooh, which has gone viral in China. References to the character are heavily censored in the country due to a spate of memes comparing the portly leader to the cartoon bear.

“China now is scared of Winnie the Pooh,” Kjellberg said, referring to a scene in the comedy cartoon series South Park showing the Disney character in prison in China as a result of the memes.

The scene was featured in a recent episode, “Band in China,” which has been banned in China for touching on a range of topics deemed sensitive to the Chinese government, including censorship, forced labor, and organ harvesting.

“[That] says a lot about society—when South Park mocks you for censoring media, and so you prove them wrong by censoring them,” he said.