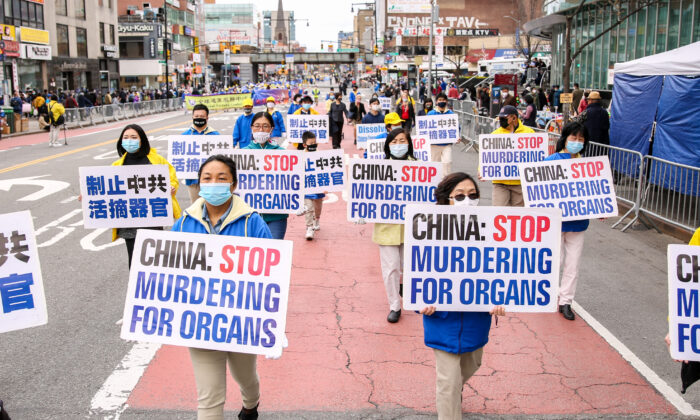 The scene begins with a bloodied man being lifted out of a box and placed on an operating table. Without checking his vital signs, a surgeon promptly slashes open the body and exposes the internal organs. “Grab it!” A voice commands. Then a kidney is yanked from the abdomen, placed in a fluid-filled bag, and sent on its way to be sold on the black market.

This gruesome scene is from season one, episode five of Netflix’s global hit series, “Squid Game,” a six-part fictional contest that takes place in Korea.

In the show, recruiters seek out 456 contestants and invite them to compete for a winner takes all prize of $38 million. Specifically sought are contestants who are struggling financially, deeply in debt to loan sharks, or simply down on their luck and feel they have nothing left to lose.

After the first game begins the unsuspecting contestants are shocked to learn that losers pay with their lives. During the game, armed and masked monitors shoot to kill any contestant that makes a mistake or fails to reach the end of the play. At which point, the dead and dying are carted away in wooden boxes and cremated. The boxes of those with salvageable organs are marked with a red dot and swiftly sent to the operating room.

The Squid Game is not Korea’s first or only project that focuses on forced organ harvesting. Korea released a movie titled “Traffickers” in 2012. The movie was based on the real-life experience of a Korean woman who had her organ harvested for profit by Korean triad organizations in collaboration with Chinese customs, hospitals, and police departments. TV North Korea also filmed a documentary titled “Kill to Live” in 2017.

In an interview with The Epoch Times, Lee Seung Won, president of the Korea Association for Ethical Organ Transplants, said that there are no accurate statistics so far to confirm the numbers. Chinese authorities hide the facts and Koreans coordinate their hospital visits through unofficial channels. The Korean government has not been able to confirm the number of Koreans who receive transplants in China.

“In order to get an accurate number of Koreans who received transplants in China, we are moving forward to seek cooperation with the government and plan to release the results to the international community as soon as they are available,” Lee said.

In June, experts from the Office of the United Nations High Commissioner for Human Rights issued a statement saying they were “extremely alarmed” by reports of alleged “forced organ harvesting” by the CCP targeting minorities, “including Falun Gong practitioners, Uighurs, Tibetans, Muslims, and Christians.”

The statement said credible information indicates the victims are being subjected to blood tests and organ examinations without their consent. Testing results are being registered in a database of living organ sources for the purpose of future organ allocation. Involved in the systematic organ harvesting were Chinese medical personnel, including surgeons, anesthesiologists, and public sector professionals.

In February 2020, the Wuxi People’s Hospital in China performed its first double lung transplant on a 59-year-old patient whose lungs were damaged by the CCP virus, which causes COVID-19.

According to a 2016 report published in the Journal of Biomedical Research, of the 1 million to 1.5 million Chinese citizens who need an organ transplant each year, fewer than 10,000 are successfully matched.