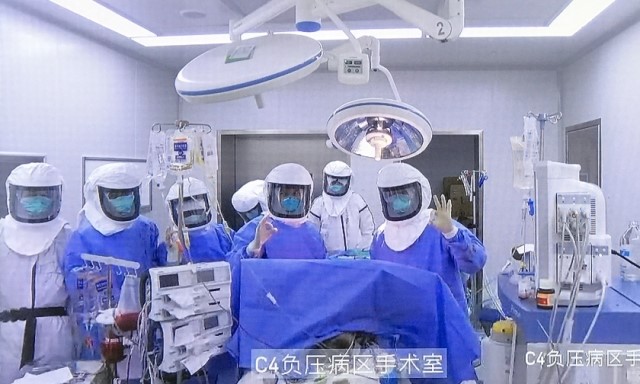 A 69-year-old patient, previously infected with the CCP virus, underwent a lung transplant at Wuxi People’s Hospital on Feb. 29. (screen shot of a report by southcn.com)
By Sophia Fang

The first lung transplant on a patient previously diagnosed with COVID-19 was performed by Dr. Chen Jingyu in Wuxi, Jiangsu Province, on Feb. 29. Then, on March 1, March 8, and March 10, three similar procedures were performed on elderly patients.

All recipients had been infected with the CCP (Chinese Communist Party) virus, commonly known as the novel coronavirus, but tested negative at the time of the transplants, according to the Chinese reports. Since their lungs had suffered irreversible damage, the patients were intubated and put on ECMO (extracorporeal membrane oxygenation) prior to surgery.

Meanwhile, the Chinese reports provided very little, though identical, information about the source of each pair of lungs: a brain-dead person in another province.

The short wait times for those transplants very likely indicate the donors were killed for their organs, a conclusion that’s strengthened by the number of such surgeries performed in the past month. Predetermining the availability of an organ for transplant is impossible in any system that depends on voluntary organ donation.

“In addition to highlighting the unusually short waiting time for suitable donors, allocating donor lungs to such patients at this time seems an unusual decision which might be medically challenged,” Dr. Jacob Lavee, director of the heart transplant unit at Sheba Medical Center in Israel and a founding member of Doctors Against Forced Organ Harvesting, told The Epoch Times via email.

“However, it certainly hints towards an ample supply of such lungs, or else an irresistible urge to become scientifically world famous.”

Take the procedure by Chen at Wuxi People’s Hospital, for example, at which the wait time for a pair of lungs was less than a day.

A 59-year-old patient tested positive for the CCP virus on Jan. 26. On Feb. 7, he was intubated, and on Feb. 22, put on ECMO. Two days later, he was transferred to Wuxi Infectious Disease Hospital, apparently still infected.

It’s unclear how this patient came to be in the care of Chen at the Wuxi People’s Hospital.

In an interview with Southern Metropolis Daily, Chen described how the decision to conduct the transplant was made.

“The patient lung started to bleed profusely on Feb. 28,” Chen said. “The entire lung was filled with blood and was stretched tight. He almost died. … After discussing it with the provincial level experts, we decided to perform an emergency lung transplant. Coincidentally, there was a donor.”

A day later, the lungs from an allegedly brain-dead donor were transported 500 miles to Wuxi from Henan Province, via the “green gateway” for organs—special regulations applied to railways and airlines to allow for the fastest possible transport of organs for transplant. In this case, the high-speed rail was used.

Even under normal circumstances, it would be considered miraculous to find a pair of matching lungs within a day, especially amid the chaos of the CCP virus epidemic.

Who was the donor? How did the donor come to be brain-dead? Who handled the organ donation procedures? How did the family members cope with it? Many questions remain unanswered.

The only way to select individuals for transplantation prior to having an organ is through reverse tissue matching—finding the donor after the recipient is selected.

Yet there seems to be an abundance of “brain-dead donors” with perfect lungs. After that transplant, Chen told ThePaper.cn: “We can select some severely infected patients in Wuhan who are suitable for lung transplant, those with high [transplant] success rate, those in their 20s, 30s, 40s, 50s. We want to save them via lung transplants.”

In most countries, it’s common practice to have a pool of recipients waiting for the unpredictable event of an eligible donor dying, making the wait time months, if not years. The complexity of a lung transplant often means longer wait times.

However, in China, reverse matching has become a common practice since 2000. There is a pool of living people waiting for a recipient to check in to the hospital, and whoever matches the blood type and tissue type of this recipient becomes a “brain-dead donor,” according to evidence gathered by independent investigators.

In the week following the Feb. 29 transplant, there were reports about three more transplants performed on even older patients.

On March 10, Chen performed a lung transplant on a 73-year-old CCP virus-infected patient with diabetes and kidney-function issues. The lungs of an allegedly brain-dead donor were transported by air to Wuxi from Guangzhou, and again, there was no additional information provided about the donor.

Meanwhile, in another hospital 100 miles from Wuxi, two lung transplants were performed.

On March 1, a 66-year-old female, who had tested positive for CCP virus on Jan. 31, underwent a double lung transplant at Zhejiang University First Affiliated Hospital. The director of the lung transplant department, Dr. Han Weili, performed the procedure, which involved organs from Hunan Province.

On March 8 in the same hospital, a 70-year-old patient who had been on ECMO since Feb. 26 received a pair of lungs from an allegedly brain-dead person in Jiangxi Province.

For those who are familiar with China’s illicit transplant practices, the recent procedures may recall the years prior to 2015, when healthy prisoners were known to be killed on demand. Under international pressure, China started a show “organ donation program” and announced that no prisoners’ organs would be used after Jan. 1, 2015.

In 2017, the official numbers were 10,793 kidney transplants, 5,149 liver transplants, 299 lung transplants, and 446 heart transplants, raising questions about how the new organ donation program could supply organs for 16,687 transplant operations.

A nine-year accumulative total number of organs donated in Hunan Province, according to Hunan-based Xiaoxiang Morning Post, showed that as of August 2019, 4,291 kidneys, 1,623 livers, 35 hearts, and 11 lungs were donated by 2,233 individuals.

Hunan Province has a population of almost 70 million. In nine years, the donation program there saw an average of 1.2 lungs donated per year. Therefore, based on China’s population of 1.4 billion, the country could be expected to see 24 lungs donated in a year. Yet the lung transplant numbers tell a different story.

Wuxi People’s Hospital, where Chen serves as the deputy director, manages China’s lung transplant registry. While it isn’t accessible by the public, Chinese media reports have provided glimpses of it.

In an article published in 2017, Chen discussed developments in lung transplantation in China and provided a chart that showed the total lung procedure numbers up to 2016.

“Wuxi People’s Hospital’s number is 70 percent of the national total,” Chen said. “There were two months in 2016, when we did 20 (lung transplants) in one month. We also have done six lung transplants in 24 hours. We have three lung extraction teams. At least for our hospital, lung transplant is very mature. It is an ordinary chest operation.”

As many independent investigative reports have previously stated, the donation numbers and the transplant numbers in China still don’t add up.

While the Chinese registry is considered a state secret, the TTX data is readily available for the public to examine. The data published on the ISHLT website shows the total number of lung transplants by 139 centers is 3,936 during the time period from July 1, 2017, to June 30, 2018. That is an annual average of 28 lung transplants per center.

The China-Japan Friendship Hospital lung transplant center was established in March 2017 in Beijing, with Chen as deputy director. By November 2018, the center had conducted 154 lung transplants. A comparison chart of its growth against the world’s top 10 lung-transplant centers shows that it’s the fastest-growing center in the world.

The red line in the chart is China-Japan Friendship Hospital. Just what is behind its unusual growth curve?

On March 1, the Independent Tribunal Into Forced Organ Harvesting from Prisoners of Conscience in China issued its final judgment, after two years of reviewing evidence and multiple hearings.

Falun Gong, also known as Falun Dafa, which consists of meditative exercises and moral teachings centered around the tenets truthfulness, compassion, and tolerance, has been subjected to a brutal persecution by the Chinese communist regime for more than two decades. Hundreds of thousands of adherents have been thrown into prisons, labor camps, and brainwashing centers, where many have been tortured in an effort to force them to renounce their faith, according to the Falun Dafa Information Center.

The tribunal concluded that Falun Gong practitioners have been the primary source of organs to fuel the Chinese regime’s lucrative transplant industry and that the regime’s forced organ harvesting has constituted crimes against humanity.

Additionally, “there is no evidence of the practice [of forced organ harvesting] having been stopped, and the Tribunal is satisfied that it is continuing,” it stated.

Chen, China’s top lung-transplant surgeon, is an active user on WeChat with 985,000 followers. He frequently posts pictures of lung transplants and has offered live broadcasts of the procedures.

As the world grapples with the spread of the CCP virus, Chen is busy traveling the country. On March 12, he went to Sichuan Province to perform lung transplants for two 66-year-old recipients in one day. Miraculously, two allegedly brain-dead donors had been found in the same hospital in Chongqing on March 11.