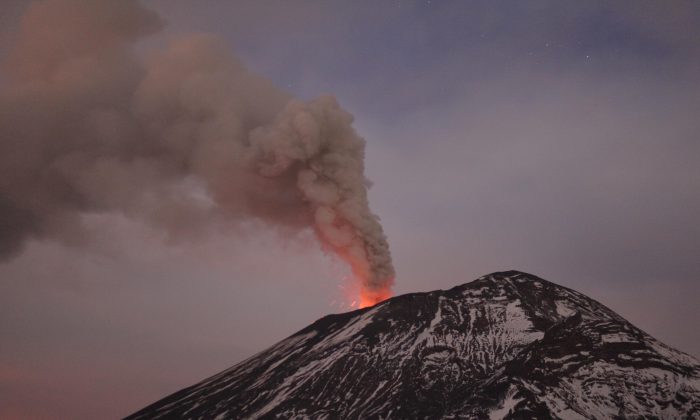 Mexico City Mayor Miguel Angel Mancera says a total of 115 people have died in the capital following the magnitude 7.1 earthquake that shook the capital and nearby states.

That would bring the nationwide death toll to 245.

The latest quake struck around 90 miles southeast of Mexico City, shattering glass, shearing off the sides of buildings and leaving others in dusty piles of destruction.

Parts of the capital, home to some 20 million people, are built on an ancient lake bed that trembles easily in a quake.

Both Mexican earthquakes occurred along the Cocos tectonic plate, which skirts the western coast of Mexico and is slowly sliding beneath the North American plate.

As terrified locals fled onto the streets, an active volcano just 43 miles away from Mexico City exploded into life – sending a thick black plume of smoke into the sky.

A church collapsed during mass, killing 15 people, in Atzitzihuacan on the slopes of the Popocatepetl volcano, Puebla Governor Jose Antonio Gali said.

Volcano experts said it is possible that the earthquake triggered the eruption by causing a reservoir of magma to burst towards the surface, according to Daily Star Online.

Popocatepetl is an active volcano. Although now it’s “normal” after the “mild eruption”, the 20 million residents of the Mexican capital could be at risk in the event of a catastrophic eruption.