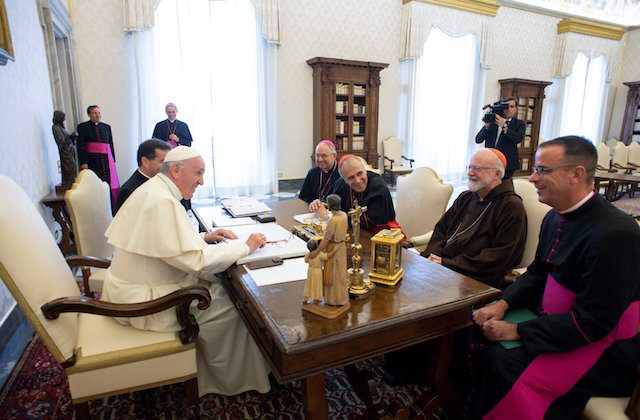 VATICAN CITY—Pope Francis has ordered an investigation of an American bishop accused of sexual misconduct with adults and accepted his resignation, deepening a worldwide clerical abuse scandal.

The Vatican and U.S. Church officials announced the investigation on Sept. 13 as the pope was meeting U.S. Catholic Church leaders to discuss a scandal that has shaken his papacy.

The Vatican said the pope had appointed Archbishop William Lori of Baltimore to run the Wheeling-Charleston diocese, West Virginia until Bishop Michael J. Bransfield is replaced.

There were no details on the specific allegations against Bransfield and neither he nor his legal representatives could immediately be reached for comment.

The Catholic Church worldwide is reeling from crises involving sexual abuse of minors, deeply damaging confidence in the Church in the United States, Chile, Australia, and Ireland where the scandal has hit hardest, and elsewhere

In the United States alone, the Church spent about $4 billion in compensation and other costs related to the priest sex abuse crisis between 1950 and 2015, according to the National Catholic Reporter.

The advocacy group BishopAccountability.org says Church data shows that 6,721 clerics have been “not implausibly” or “credibly” accused of sexually abusing minors in the United States between 1950 and 2016 and that there were about 18,500 victims.

On Sept. 13, the archdiocese of Baltimore’s website said the pope had ordered the archbishop to investigate allegations of sexual harassment of adults by Bransfield.

“My primary concern is for the care and support of the priests, and people of the Diocese of Wheeling-Charleston at this difficult time,” Lori said in a statement.

“I further pledge to conduct a thorough investigation in search of the truth into the troubling allegations against Bishop Bransfield and to work closely with the clergy, religious and lay leaders of the diocese until the appointment of a new bishop,” he said.

The announcement of Bransfield’s resignation came while the pope was meeting Cardinal Daniel DiNardo, president of the U.S. Conference of Catholic Bishops (USCCB), Cardinal Sean O’Malley of Boston, and Archbishop José Horacio Gómez of Los Angeles.

In a statement afterwards, DiNardo said they told the pope of “our situation in the United States—how the Body of Christ is lacerated by the evil of sexual abuse.” He called the meeting “a lengthy, fruitful, and good exchange”.

DiNardo had asked for the meeting after Archbishop Carlo Maria Vigano last month accused the pope of knowing for years about sexual misconduct by former Cardinal Theodore McCarrick and of doing nothing about it.

In July, McCarrick became the first cardinal to resign in nearly 100 years after American Church officials said allegations that he had sexually abused a 16-year-old boy almost 50 years ago were credible and substantiated.

McCarrick has said that he had “absolutely no recollection” of the alleged abuse of the teenager but has not commented on the other allegations against him.

DiNardo has called for the Vatican to launch an investigation, known as an “apostolic visitation,” into how McCarrick could have risen steadily through the ranks of the U.S. Church although many people knew that he had engaged for years in sexual misconduct with adult male seminarians.

In the 11-page statement published on Aug. 26, Vigano, the former Vatican ambassador to Washington, launched an unprecedented broadside by a Church insider against the pope and a long list of Vatican and U.S. Church officials.

DiNardo has said Vigano’s accusations “deserve answers that are conclusive and based on evidence”.