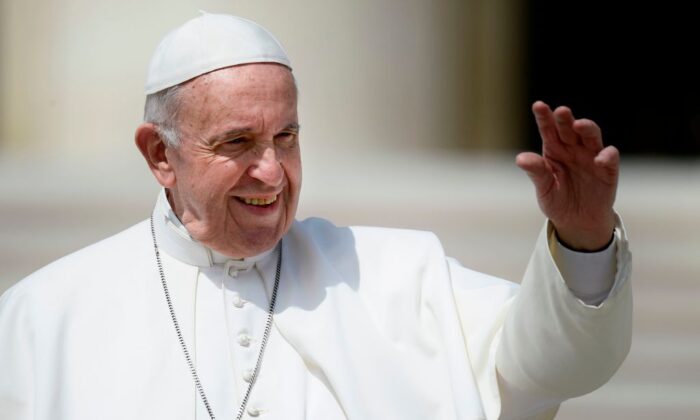 Pope Francis blesses worshipers at the end of the weekly general audience at St. Peter's square in the Vatican, on May 8, 2019. (Filippo Monteforte/AFP via Getty Images)
Viewpoints

Pope Francis Should Resign for the Good of the Church

On Dec. 13, 2021, Jimmy Lai, the founder of one of Hong Kong’s most popular newspapers, Apple Daily, was sentenced to 13 months in jail for participating in a vigil marking the 1989 Tiananmen massacre in Beijing. Yet, while his imprisonment sparked condemnation around the world, in one place, it elicited only silence: the Vatican.

Upon his arrest, the Vatican was also strangely silent. As William McGurn, columnist for Wall Street Journal, stated at the time, Jimmy Lai is not only Hong Kong’s most well-known champion of democracy; he is also its most prominent Catholic layman. At that moment, when he and his family needed their shepherd the most, Pope Francis was MIA.

In 2018, the Vatican signed a provisional agreement with the Chinese Communist Party on the appointment of Catholic bishops. However, when renewing the agreement in 2020—the terms of which Rome insists on keeping secret—the Vatican Secretary of State Cardinal Pietro Parolin said the pact was “only a starting point” for better relations between the two.

McGurn noted that the agreement “gives the communist state extraordinary say over the selection of Catholic bishops. The Vatican defends the deal as the means for carving out protections for the Church’s continued presence in China. Unfortunately, rather than herald a thaw in China’s hostility toward religion, persecution has increased—and not only against Catholics.”

Pope Francis not only chooses to see no evil in China, but he also won’t hear of any either.

When the former Bishop of Hong Kong, Cardinal Joseph Zen, flew to Rome in September 2020 to discuss the issue with the Vatican, Pope Francis refused to see him. He has also declined to meet the Dalai Lama and makes no mention of the Uyghurs.

Yet somehow, Papa Bergoglio finds the time to discuss justice and inequality with an NBA players union delegation that presented him with a Black Lives Matter T-shirt.

In October 2021, the XVI Ordinary General Assembly of the Synod of Bishops commenced. It is scheduled to conclude in October 2023.

In opening the Synod, Pope Francis called for the Catholic Church to “encounter, listen, and discern” and become “a different Church” while avoiding any mention of the Church’s God-given mission of teaching the faith and doctrinal adherence.

In particular, the Pope asked that Catholics “not soundproof our hearts; let us not remain barricaded in our certainties. So often, our certainties can make us closed. Let us listen to one another.”

Just like he listened to Cardinal Zen and the Dalai Lama. What hypocrisy!

The Synod is nothing more than finding more excuses to “modernise,” even though this insistence on modernising has led to dwindling congregations, except in parishes and orders that are faithful to tradition, doctrine and the Church’s Magisterium.

“The grace of God has appeared, offering salvation to all. It trains us to reject godless ways and worldly desires, and live temperately, justly and devoutly in this age as we await our blessed hope, the appearing of the glory of the great God and Saviour, Christ Jesus.”

It is reasonable to surmise that the fact the only areas of growth in the Church are those that are counter-cultural, and thus faithful to the Church’s tradition and teaching is a source of great irritation to Pope Francis and his fellow travellers—hence the recent draconian crackdown on tradition.

Last year, the Pope issued the motu proprio entitled “Traditiones Custodes,” calling for the restriction of the celebration of the Traditional Latin Mass.

A further document addressing its implementation, the Responsa ad Dubia, outlined these restrictions. Many priests will be banned from saying the Traditional Mass, and it will only be able to be celebrated in limited settings, all in the name of fostering “unity” in the Church.

Ironically, it is this Pope that is causing division, seemingly with the aim of driving out pious and devout Catholics, who want nothing more than to remain members of the one holy, catholic, and apostolic Church.

Following his election as Pope John Paul II, Karol Wojtyla made his first international visit to his native Poland. Benedict XVI made sure a trip to his native Germany was a priority. However, Pope Francis has never been back to Argentina. Why?

As reported by Church Militant in January, Francis’ conspicuous refusal to visit Argentina cannot be separated from what Bishop Sergio Buenanueva, coordinator of the Pastoral Council for the Protection of Minors and Vulnerable Adults of Argentina’s bishops’ conference, has called Argentina’s “gravest” crisis of modern times: clerical sex abuse.

Speaking with La Nación, Argentina’s biggest daily newspaper, Buenanueva said the Church in Argentina doesn’t yet have a registry of abusive clergy. He also criticised the “sick system within the Church that covered up or that didn’t favour the abuses coming to light and ended up favouring the criminal.”

Critics allege then-Cardinal Jorge Bergoglio was part of that sick system, pointing out that Bergoglio has been active in protecting convicted paedophile priests or promoting those who have covered up clergy abuse in the past. These include Bishop Gustavo Zanchetta, convicted on Feb. 21 of sexual abuse of two seminarians.

Unlike Cardinal George Pell, who stood aside from his post as Prefect of the Secretariat for the Economy until he was finally cleared unanimously by the High Court of Australia in April 2020, Zanchetta retained Francis’ protection.

In 2017, Francis appointed Zanchetta as Assessor of the Administration of the Patrimony of the Apostolic See after Zanchetta resigned as bishop of Orán, citing “health reasons.”

This, in spite of the fact that in 2016, five priests—including three of Zanchetta’s vicar generals—and two monsignors formally accused the bishop of financial mismanagement, authoritarianism, and sexual misconduct.

Then last week, it emerged that the Pope had relieved Bishop Fernandez Torres of Puerto Rico for speaking out against the vaccine mandate there.

Given that the coronavirus vaccines available at present have been tested on or produced with cell lines of aborted babies, the Church has determined that getting vaccinated is a matter of personal discernment, which each individual must make after informing his or her conscience. As such, the Church teaches that there is no moral obligation to be vaccinated.

Indeed, the Congregation for the Doctrine of the Faith, the Church’s teaching authority where faith and morals are concerned, issued a statement to that effect in December 2020.

While Papa Bergoglio has time to don BLM t-shirts and inform nuns that they should “fight” against sexism in the Church, as he did in a recent Twitter post, he is voiceless about the persecution of millions of believers, active in his alienation of traditional Catholics, and feckless in facing the scourge of sexual abuse by clergy.

All betrayals of the values of the Gospel.

Jorge Bergoglio was elected Pope for the apparent reasons of stemming the flow of the faithful away from the Church, particularly in South America and cleaning up Church finances and sexual abuse scandals.

However, on these counts, and so many others, Francis’ papacy has been a litany of failures. As a result, he has no alternative, for the good of the Church, but to resign.