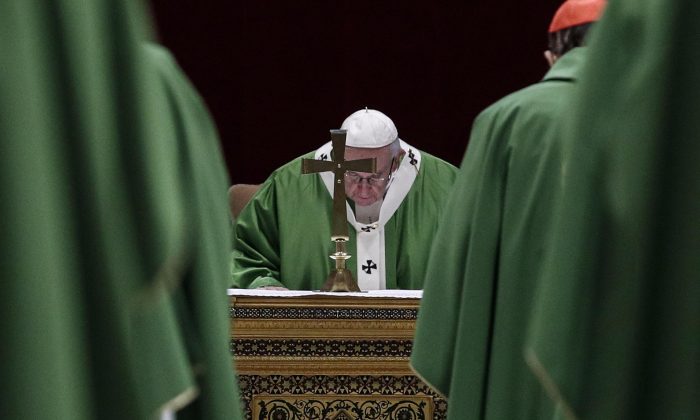 Pope Francis attends a Eucharistic celebration at the Regia Hall of the Apostolic Palace in the Vatican on Feb. 24, 2019, within the fourth and last day of a global child protection summit. (GIUSEPPE LAMI/AFP/Getty Images)
World

Pope Francis pledged to end the dark history of church coverups in his closing speech at the Vatican’s four-day summit addressing the global clergy sexual abuse crisis, but failed to offer any concrete plans that would hold bishops accused of such crimes accountable—aside from offering some rough guidelines.

In the first global Catholic summit of its kind, Francis offered eight points of priority for the church moving forward. Some 190 senior Catholic bishops and religious superiors attended the summit.

Describing it as an “all-out battle” against the sexual abuse of minors, he said victims should be the priority and that priests must follow a path of purity, with the “holy fear of God” guiding the examination of their own failures.

“The church has now become increasingly aware of the need, not only to curb the gravest cases of abuse by disciplinary measures and civil and canonical processes, but also to decisively confront the phenomenon both inside and outside the church,” Francis said Feb. 24, following a closing Mass in the Sala Regia.

The rough guidelines range from changing the mentality of clergy toward protecting children rather than the institution, and to reviewing guidelines by episcopal conferences. But many of the abuse survivors who made the long trip to Rome and other advocates reacted in frustration after Francis failed to promise a “zero tolerance” approach to pedophile priests and those who cover up such acts.

Melanie Sakoda, a board member of the Survivors Network of those Abused by Priests (SNAP), told The Epoch Times that the summit failed to address accountability problems properly and said there are still priests who have committed such abuses serving in the ministry today.

“In my eyes, it was a failure. Once again, they met, they talked and talked. Words don’t protect children. Only actions protect children and action is not what we are seeing,” she said. “It was disappointing but not unexcepted.”

Sakoda said Francis refused a chance to meet with survivors on Feb. 20, some who were from SNAP.

She hopes Francis will enact something more concrete in the future. “That just shows where his commitment is,” she said. “He [the pope] doesn’t want to listen to people like us. He’ll listen to victims who are going to kiss his hand and who would be grateful for any crumbs he gives them.”

Steven Kelly, a lawyer with the national firm Sanford Heisler Sharp who represents child sexual-abuse victims by clergy among others, told The Epoch Times that there need to be more voices from all sectors of the community to solve the crisis since the church has shown it can’t police itself.

“It just cannot be done by a bunch of old white men in Rome,” Kelly said. “They can’t fashion a real solution that’s going to work. That’s one of the problems with their past failures and their inability to deal with this crisis.”

Kelly, who has been fighting for victims since 1988, when his older sister was raped and murdered, described the summit as a “public relations” and “lip service event.”

“It’s not a real transformative event. Talk is cheap, what action are you going to take? When he [the pope] starts making sweeping policy changes, that’s what I’m looking for and I think that’s what all survivors are looking for,” he said. “The words are meaningless without changes.”

Other victim advocates agreed that the pope was all talk.

Laura Ahearn, a New York attorney in private practice who represents clergy abuse victims, told The Epoch Times what has to change is the culture within the church.

“For many years, the Catholic church has been above the law,” she said. “The pope has talked about the themes of accountability and transparency, but I don’t think that is going to be enough … that’s still not going to change their culture of secrecy.”

“The turning point from my perspective is going to be when they bring in outside education that can help to empower children and to give them skills to recognize that certain behavior is inappropriate.”

During the summit, German Cardinal Reinhard Marx said the church destroyed documents to cover up sexual abuse cases, which have been increasingly engulfing the church in scandal, as he called for more “traceability.” Marx said the rights of the victims were “effectively trampled underfoot.”

“Files that could have documented the terrible deeds and named those responsible were destroyed, or not even created. Instead of the perpetrators, the victims were regulated and silence imposed on them,” Marx said.

Some say that enacting a global policy to combat the abuse crisis would be hard to implement, due to different legal barriers and canon law, which is the code of ecclesiastical laws governing the Catholic church.

“It could be somewhat complicated,” Sandra Yocum, associate professor of Theological and Religious Studies at the University of Dayton, told The Epoch Times.

“Because of the global nature of the church, different countries have different legal systems. The specifics need to be worked out in local context, to some extent.”

Yocum also argued that to really solve the global crisis, there have to be more people involved—not just the pope.

“The bishops have to go back to their own places and enact these things. The pope, one person, can’t do that,” she said.

The pope did propose one solid step going forward: changing church law regarding child pornography. The church currently only considers the crime a “grave delict” if the child is under the age of 14. Francis said he wants to raise the age to 18.