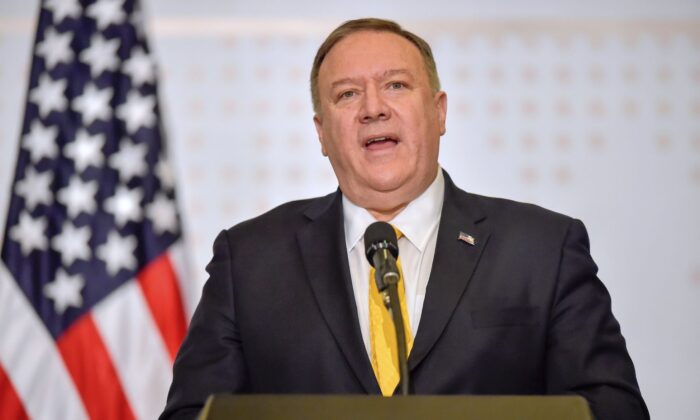 US Secretary of State Mike Pompeo speaks during the III Hemispheric Ministerial Conference of Fight Against Terrorism, in Bogota on Jan. 20, 2020. (Raul Arboleda/AFP via Getty Images)
By Frank Fang

At a meeting of governors of U.S. states and territories, Secretary of State Mike Pompeo warned about China’s influence seeping into local politics.

“It’s [China] assessed our vulnerabilities, and it’s decided to exploit our freedoms to gain advantage over us at the federal level, the state level, and the local level,” Pompeo said during a Feb. 8 speech at the National Governors Association meeting held in Washington.

“Competition with China is not just a federal issue,” Pompeo said. “It’s happening in your states, with consequences for our foreign policy.”

Among several examples he gave of such efforts by Beijing, China’s Consul General in New York City sent a letter last month to the speaker of the legislature in an unnamed state. Quoting from the letter, Pompeo said the Chinese diplomat urged U.S. officials to “avoid engaging in any official contact with Taiwan,” such as “sending congratulatory messages to the electeds” or “inviting officials in Taiwan to visit the United States.”

Pompeo said the letter illustrated a Chinese diplomat suggesting that an elected U.S. official “shouldn’t exercise his right to freedom of speech.”

China considers Taiwan a renegade province that must be united with the mainland, with military force if necessary.

In order to diminish Taiwan’s standing as a sovereign state, Beijing has criticized foreign governments for being friendly with Taiwanese government officials, and has blocked the island from joining international organizations such as the World Health Organization.

Taiwan’s Vice President-elect William Lai visited the United States from Feb. 3 to 8; he took part in the annual National Prayer Breakfast in Washington on Feb. 6.

He urged state officials to be on their guard: “Competition with China is happening inside of your state, and it affects our capacity to perform America’s vital national security functions.”

As an example, Pompeo pointed out that the Florida Retirement System, one of the largest public pension funds in the United States, is a major investor of Hikvision, a Chinese manufacturer of surveillance equipment that supplies gear to Chinese authorities in Xinjiang for monitoring Muslim minorities.

In addition, California’s pension funds have invested in companies that supply China’s military, according to Pompeo, though he didn’t identify the firms.

Following the blacklist, a spokesperson with Florida Retirement System told Reuters that it was working with external money managers to meet all regulatory requirements.

“Chinese Communist Party officials, too, are cultivating relationships with county school board members and local politicians—often through what are known as sister cities programs,” Pompeo said. A number of major American cities, such as Chicago, Los Angeles, Houston, and Washington have such partnership programs with Chinese cities.

China has established Confucius Institutes at U.S. colleges, in addition to 519 “Confucius Classrooms” set up at U.S. schools ranging from kindergarten to 12th grade.

In recent months, following U.S. officials’ warnings that such institutes engage in academic censorship, many colleges have shut the Confucius Institutes. Schools in 25 states are in the process or already have halted these programs after conducting internal reviews, Pompeo said.

“Don’t lose sight of the competition from China that’s already present in your state. Let’s all rise to the occasion and protect our security, our economy; indeed, all that we hold dear, all of those freedoms,”  he concluded.