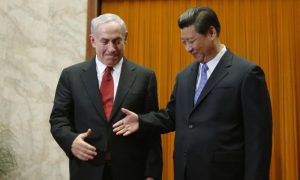 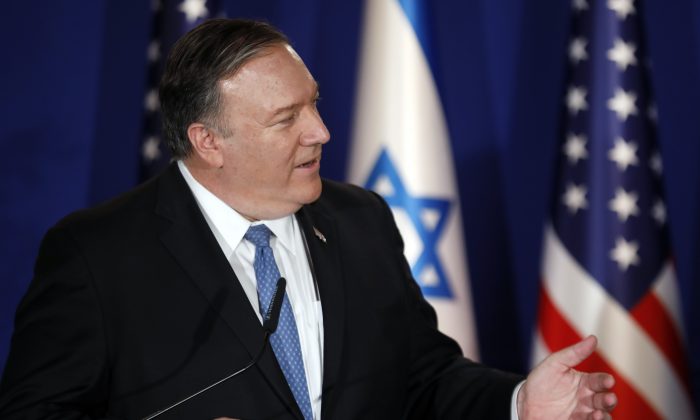 US Secretary of State Mike Pompeo speaks during a joint press conference with Israeli Prime Minister at his residence in Jerusalem on March 21, 2019. (Amir Cohen/AFP/Getty Images)
Chinese Regime

While in Israel on a two-day visit, U.S. Secretary of State Mike Pompeo warned that the security risks of China’s continued investments in Israel could compromise future intelligence-sharing and other cooperation between the United States and its Middle Eastern ally.

Pompeo made the comments during a March 21 interview with local Israeli broadcaster Channel 13.

“We want to make sure every country is wide-eyed and awake with regard to the policy threats posed by China,” he said, according to Times of Israel. “America will have to make decisions too. If certain systems go in certain places, then America’s efforts to work alongside you will be more difficult, and in some places we won’t be able to do so.

The comments came on the heels of a new report on Israel-China relations published that same day by U.S. policy think tank RAND, which outlined “security concerns” and “espionage risks” associated with China’s ambitions to acquire high-tech through investments in Israeli tech firms. The Chinese regime also seeks to take advantage of Israel’s strategic geographic location to invest in infrastructure projects that benefit China’s trade—“with insufficient returns for Israel” and possibly putting the United States at risk, according to the report.

These concerns are not new. Last November, the Hudson Institute published an analysis concluding that Beijing was investing heavily in Israel’s artificial intelligence and other cutting-edge tech sectors so that any military applications could be used to serve the Chinese military. Building such commercial ties, according to the Institute, would also help China bulk up its geopolitical influence in the Middle East.

For example, Chinese telecoms giant Huawei has an research and development center in Israel, and in December 2016, acquired HexaTier, an Israeli cybersecurity startup.

Pompeo’s comments were the first indication that U.S. authorities would take direct action in Israel in the wake of China’s maneuvers.

The State Secretary mentioned Huawei specifically in his March 21 comments, explaining that the firm poses a “real risk to the people of Israel” due to the risk of the Chinese regime conducting espionage through its technology.

Another project highlighted by think tanks and U.S. officials alike is China’s successful bid to operate a private port at Haifa, a commercial hub that is also home to an Israeli naval base.

The base regularly hosts joint U.S.-Israel navy drills and visits by U.S. vessels.

Gary Roughead, a retired U.S. admiral, told Newsweek in a Sept. 14 interview, about the security implications: “The Chinese port operators will be able to monitor closely U.S. ship movements, be aware of maintenance activity, and could have access to equipment moving to and from repair sites, and interact freely with our crews over protracted periods.”

The Epoch Times’ previous reporting examined the uptick in Chinese investment in Israel, which has focused on scoring military technology-related deals and funneling money into tech sectors that the Chinese regime wants to aggressively develop for its domestic industries.

According to a report released by the Tel Aviv-based research firm IVC Research Center, China’s investments in the country’s tech startups reached $325 million during the first three quarters of 2018, a 37 percent rise from the year prior.

Meanwhile, annual trade between the two nations has now surpassed $11 billion, 200 times larger than the annual figure back in 1992, according to data from Israel’s Ministry of Foreign Affairs.

Different voices within Israeli government and society are taking notice.

The government said it would open an interagency review into the Haifa deal, while local newspaper Haartez reported in December 2018 that legislation to set up a government committee that would screen foreign investment for national security risks has moved forward.

The country’s National Security Council also has plans to draft a special report on the national defense implications of foreign investments, as well as China and Russia’s cyber espionage efforts, according to a Feb. 25 report by local media Maariv.

Meanwhile, multiple newspaper editorials have since highlighted the issue of China’s courtship of Israel.

“It’s a story of influence, China buys more and more infrastructure, and thus bases its position in the battle for supremacy between it and the United States,” an official told local media People & Computers in a March 4 editorial.

Haartez predicted in a March 5 analysis that when Israeli Prime Minister Benjamin Netanyahu visits the United States later this month, he will likely seek to assure Trump that an investment-vetting mechanism will get approved and established in Israel.