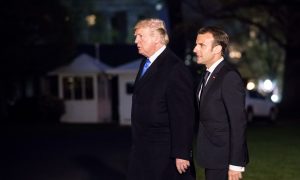 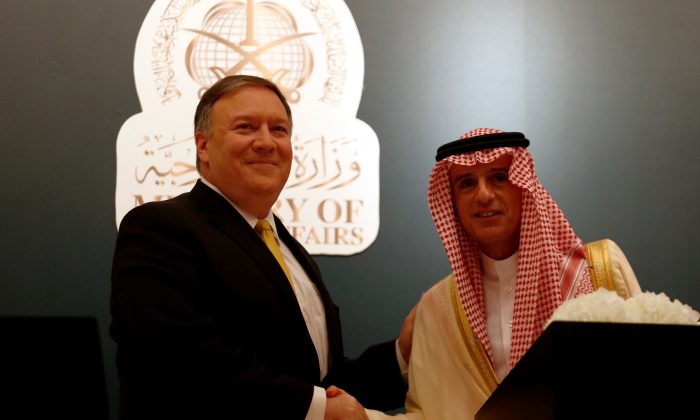 Pompeo: US Concerned by ‘Destabilising and Malign Activities’ of Iran

The former CIA director was speaking on a flying visit to the region, where he had earlier in the day met with Saudi King Salman in Riyadh and stressed the need for unity among Gulf allies as Washington aims to muster support for new sanctions against Iran to curb its missile program.

The whirlwind trip to NATO in Brussels and to Middle East allies came only hours after Pompeo was confirmed as Trump’s top diplomat. He has not even visited his own office yet, he told Netanyahu.

Speaking alongside the Israeli leader, Pompeo said in Tel Aviv: “We remain deeply concerned about Iran’s dangerous escalation of threats towards Israel and the region, and Iran’s ambition to dominate the Middle East remains.”

He added: “Strong cooperation with close allies like (Israel) is critical to our efforts to counter Iran’s destabilising and malign activities through the Middle East, and indeed, throughout the world.”

Pompeo also said that the relocation of the American embassy to Jerusalem — a move set to take place on May 14 — was “recognising (the) reality” of “Jerusalem as the capital of Israel and the seat of its government.”

But he added, “I also stress, as President Trump has said in December, the boundaries of Israeli sovereignty in Jerusalem remain subject to negotiations between the parties, and we remain committed to achieving a lasting and comprehensive peace that offers a brighter future for both Israel and the Palestinians.”

Netanyahu, who called Pompeo a “true friend of Israel,” echoed the Secretary’s focus on Iran, stressing the closeness of U.S. and Israeli cooperation on the issue.

“I think the greatest threat to the world and to our two countries, and to all countries, is the marriage of militant Islam with nuclear weapons, and specifically the attempt of Iran to acquire nuclear weapons. We have had a very productive talk today on this subject,” he said.

In contrast to his fierce opposition to U.S. policy during the Obama administration’s negotiations with Iran to reach a nuclear deal in 2015, which he called a “historic mistake,” Netanyahu said Israel was willing to support U.S. President Donald Trump’s efforts to strengthen the 2015 agreement.

In Saudi Arabia earlier, Pompeo said that the U.S. would abandon the 2015 nuclear deal with Iran, reached under Obama, unless talks with European partners yield improvements to ensure the Islamic Republic of Iran never possesses nuclear weapons.

“Iran destabilises this entire region. It supports proxy militias and terrorist groups. It is an arms dealer to the Houthi rebels in Yemen. It supports the murderous Assad regime (in Syria) as well,” he said in joint remarks with Saudi Foreign Minister Adel al-Jubeir. “Iran conducts cyber-hacking campaigns,” he added.

“Gulf unity is necessary and we need to achieve it.”

Pompeo also addressed the rift between Qatar and its neighbours, telling reporters after leaving Riyadh: “I think they would all agree that it’s in everyone’s best interest if the Gulf states all figure out how to be together to meet the common challenge in Iran.

“We are hopeful that they will, in their own way, figure out how to remove the dispute between them.”

Saudi Arabia, along with the United Arab Emirates, Bahrain and Egypt, cut off travel and trade ties with Qatar last June, accusing it of supporting terrorism and Iran.

Doha has denied the accusations and has said its three fellow Gulf countries aim to curtail its sovereignty. Iran denies supporting terrorism or having sought to develop nuclear weapons.

The United States, which has military bases in both Qatar and some of the countries lined up against it, is trying to mediate the Qatar feud. Trump publicly sided with the Saudis and Emiratis early in the crisis, but is now pushing for a resolution to maintain a united front against Iran.

Yemen’s armed Iranian-aligned Houthi movement has fired over 100 missiles into Saudi Arabia, the latest salvo killing a man on Saturday in the southern Saudi province of Jizan.

The Saudi-led coalition that intervened in Yemen’s civil war in 2015 accuse Iran of providing the missiles to its Houthi allies, which Tehran denies.

Pompeo’s trip comes as Trump considers whether or not to revive U.S. sanctions on Iran according to the original May 12 deadline.

“There is still work to do,” Pompeo told the press on Sunday regarding the deal. He confirmed that Saudi leaders had told him they would support any fixes to the agreement and that progress had been made with the European Union to address President Trump’s concerns regarding the 2015 Obama-era nuclear agreement that Trump sees as deeply flawed.

Britain said on Sunday that it, France and Germany — the other signatories to the 2015 Iran deal along with Russia, China and the European Union — agreed that an accord was the best way to prevent Tehran from gaining nuclear weapons, but were nearing an agreement on a package they hope could persuade Trump to save the pact.

“(We’re) committed to continue working closely together and with the U.S. on how to tackle the range of challenges that Iran poses – including those issues that a new deal might cover,” a statement from British Prime Minister Theresa May’s office said.

Macron and Iranian President Rouhani spoke by telephone on Sunday and said they would work together in the coming weeks to keep the 2015 agreement, the Elysee said in a statement.

The 2015 agreement helped Tehran secure a removal of most international sanctions, while in return, the regime promised to significantly reduced its enrichment of uranium for nuclear fuel and limit its capability for developing nuclear bombs. However, critics have pointed to the fact that the restrictions on Iran’s uranium enrichment start to phase out in 2026, allowing the regime at that point to built thousands of advanced centrifuges. At that point, Iran could develop a nuclear weapon in as little as six months.

U.S. Ambassador to the United Nations Nikki Haley said at the American Enterprise Institute on Sept. 5, “The biggest concern is that Iranian leaders – the same ones who in the past were caught operating a covert nuclear program at military sites–have stated publicly that they will refuse to allow [International Atomic Energy Agency] inspections of their military sites.”

“We were promised ‘anytime, anywhere’ inspections of sites in Iran. The final agreement delivered much less. The promised 24/7 inspections apply only to Iran’s ‘declared’ nuclear sites. For any undeclared but suspected sites, the regime can deny access for up to 24 days,” she said.

Iran has repeatedly said its ballistic missile programme has nothing to do with its nuclear work and is non-negotiable.

On his trip, Pompeo also called on Gulf allies to contribute funding and troops to stabilise areas in Iraq and Syria where a U.S.-led coalition has largely defeated ISIS jihadists.

Earlier this month, Jubeir said Saudi Arabia was ready to move on troops on the ground into Syria if needed, but that they were waiting for the U.S.

Asked about Saudi troops on the ground in Syria, Pompeo said: “We will sit down and talk about… how to best make sure that this is not America alone working on this, it’s the Gulf states working alongside us to take care of their own region.”

By Lesley Wroughton and Ori Lewis