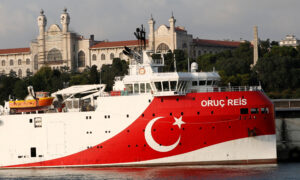 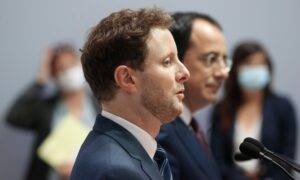 France: EU Sanctions on Turkey an Option Over Gas Standoff
0 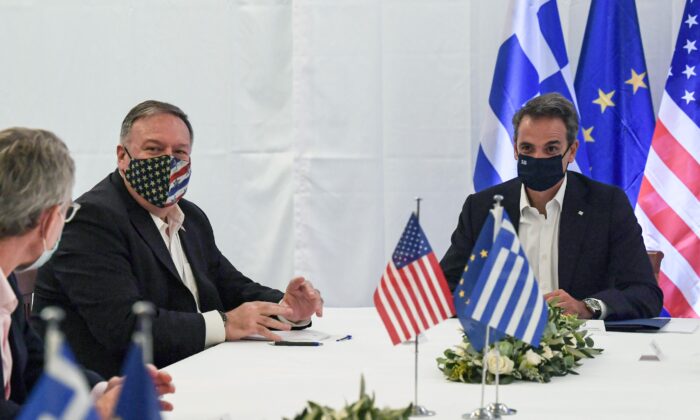 U.S. Secretary of State Mike Pompeo and Greek Prime Minister Kyriakos Mitsotakis hold a meeting during their visit to the Naval Support Activity base at Souda, Crete, Greece, on Sept. 29, 2020. (Aris Messinis/Pool via Reuters)
Europe

Pompeo Urges Greece and Turkey to Press on With Talks

ATHENS—U.S. Secretary of State Mike Pompeo urged NATO allies Greece and Turkey on Tuesday to continue talks on a maritime boundaries dispute as soon as possible.

Greece and Turkey, at loggerheads on a range of issues, have agreed to resume exploratory talks over contested maritime claims in the eastern Mediterranean following weeks of tensions but have not announced a date for the talks.

“We hope that these talks can continue in a serious way,” Pompeo said after meeting Greek Prime Minister Kyriakos Mitsotakis on the island of Crete.

Pompeo is on a two-day trip to Greece following an increase in regional tension over energy resources.

Since then, Turkey has recalled the Oruc Reis, saying the move would allow for diplomacy before a European Union summit on Oct 1-2 which will discuss the issue and possible sanctions against Turkey—demanded by Cyprus, Greece, and France.

Athens and Ankara have agreed to resume the exploratory talks on maritime boundaries “in the future”, with Istanbul the venue. The talks broke off in 2016 after 60 rounds that made little progress over 14 years.

“(We) encourage them to resume discussion of these issues as soon as possible,” Pompeo said.

Pompeo, who also visited the northern Greek city of Thessalonki on Monday, said the eastern Mediterranean region should provide a foundation for energy security.

He said the United States supports Greece’s efforts to diversify energy routes and supplies and believes in Greek-U.S. security cooperation, adding that Russia was a destabilizing influence in the region.