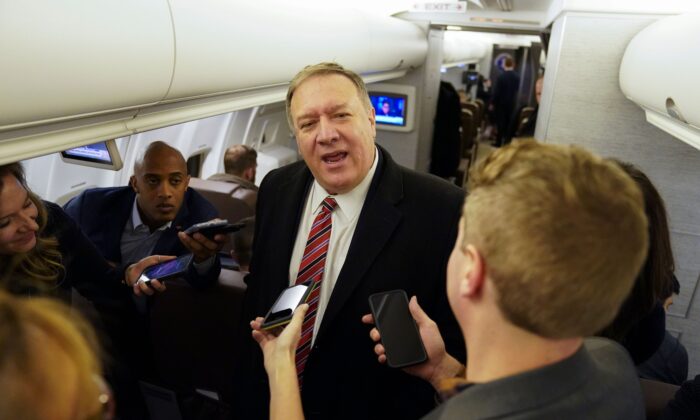 Secretary of State Mike Pompeo speaks to reporters aboard his plane en route to London, Britain on Jan. 29, 2020. (KEVIN LAMARQUE/POOL/AFP via Getty Images)
US News

A top U.S. government official on Jan. 29 urged Britain to rethink its decision to allow China’s Huawei a role in the country’s 5G networks.

The United States has previously asked countries around the world not to include the communist regime’s telecoms giant in their communications systems. UK Prime Minister Boris Johnson granted Huawei a limited role in Britain’s 5G mobile network on Jan. 28.

“There’s also a chance for the United Kingdom to relook at this as implementation moves forward,” U.S. Secretary of State Mike Pompeo said when asked by reporters about risks to America’s national security as he flew to London for talks with counterpart Dominic Raab and Johnson.

Pompeo said they have spoken with the United Kingdom “at great length” on the issue at both the political level and national security level over the past months. He said the United States sees Huawei as a real risk that is an extension of the Chinese Communist Party “with a legal requirement to hand over information to the Chinese Communist Party.”

“Our view is that we should have Western systems with Western rules, and American information only should pass through trusted networks, and we’ll make sure we do that,” he told reporters.

Pompeo said that telecoms and national security would be “part of the conversation” during his visit.

Just last December, U.S. national security adviser Robert O’Brien warned the UK government that any move to allow Chinese telecommunications companies into the nation’s 5G network would benefit the Chinese regime by allowing it access to the private data of British citizens and other sensitive information.

Following the UK’s announcement that it was granting the Chinese telecom giant a role in building “non-sensitive” parts of its next-generation wireless network, a U.S. Department of State spokesperson told The Epoch Times they are “disappointed” by the decision.

“There is no safe option for untrusted vendors to control any part of a 5G network,” the spokesperson said on Jan. 29 via email. “We look forward to working with the UK on a way forward that results in the exclusion of untrusted vendor components from 5G networks.”

The spokesperson added that the United States is continuing “to urge all countries to carefully assess the long-term national security and economic impacts of allowing untrusted vendors access to important 5G network infrastructure.”

Huawei is classified as a “high-risk vendor” by the UK, meaning that it will be excluded from the sensitive core where data is processed, and barred from all critical networks and sensitive locations such as nuclear sites and military bases. As a high-risk company, its involvement would be capped at 35 percent.

Pompeo also told reporters that the United States will “evaluate” the decision by the UK, though he acknowledged it was still “a little unclear precisely what they’re going to permit and not permit.”

Washington has repeatedly stated that Huawei—founded in 1987 by a former People’s Liberation Army engineer—is an extension of the Chinese state and that it helps Chinese intelligence to steal secrets. Huawei denies the allegations.

Huawei also denied a report on Jan. 29 that alleged the German government was in possession of evidence that the company had cooperated with Chinese intelligence.

“Huawei Technologies has never, and will never, do anything to compromise the security of networks and data of its customers,” the Chinese company said in response to the report in the Handelsblatt business daily.

The Handelsblatt report cited a confidential foreign ministry document as a “smoking gun” that showed Chinese companies were unsafe partners for building next-generation 5G mobile networks. The intelligence was shared by U.S. officials.

Huawei is currently the world’s biggest producer of telecoms equipment, with the Wall Street Journal reporting that its growth has been on the back of state subsidies to the tune of $75 billion which has helped the company undercut many competitors on price. Britain has argued that excluding Huawei would have delayed its 5G rollout and cost consumers more.

When asked if the United States will lessen the sharing of information with the United Kindgom, Pompeo brought up the topic of private company competitors.

“It’s important for everyone to know there is also real work being done by lots of private companies inside the United States and in Europe to make sure that there are true competitors to Huawei,” he told reporters.

Johnson said on Jan. 29 that he wanted to ensure people have access to the best technology and that his Huawei decision would not harm cooperation with the United States.

“We also do absolutely nothing to imperil our relationship with the United States, to do anything to compromise our critical national security infrastructure,” Johnson told parliament.

U.S. officials this year have increasingly spoken out about countries “opening their arms” to Chinese companies for key infrastructure such as artificial intelligence and 5G.

Epoch Times reporter Cathy He and Reuters contributed to this report.