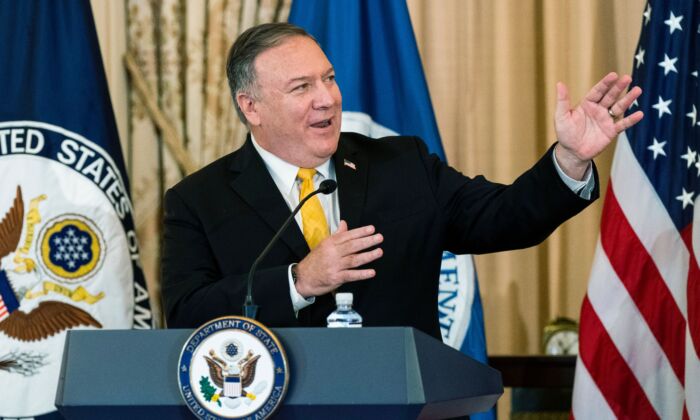 U.S. Secretary of State Mike Pompeo speaks during a naturalization ceremony hosted by the USCIS at the State Department in Washington, DC on Oct. 22, 2020. (MANUEL BALCE CENETA/POOL/AFP via Getty Images)
China-US News

On the morning of Nov. 16, Pompeo memorialized Sergei Magnitsky via a Twitter post. A tax auditor in Moscow, Magnitsky revealed Russian officials were involved in large-scale theft from the state and died in police custody on Nov. 16, 2009.

After Magnitsky passed away, the U.S., UK, Canada, and European Union passed laws named after him, to sanction foreign officials who are identified as human rights violators.

Pompeo tweeted: “To date, 55 people have been sanctioned under the Russia Magnitsky Act. The U.S. will continue to work with partners to promote accountability and impose costs on those involved in the Magnitsky case and those who commit violations and abuses of human rights.”

These 55 sanctioned violators include Chinese Communist Party (CCP) officials. On July 9, the United States imposed sanctions on four current and former government officials in connection with serious rights abuses against Uyghurs and other Muslim ethnic minorities in the northwestern region of Xinjiang.

Pompeo also crossed the Chinese regime’s red line when he spoke about Taiwan during a Nov. 12 interview on the Hugh Hewitt radio show. He said: “Taiwan has not been a part of China, and that was recognized with the work that the Reagan administration did.”

Since 1949, when the CCP took over China, Beijing has claimed the self-ruled island of Taiwan as part of its territory, despite Taiwan’s de-facto nation-state status with its own democratically-elected government, military, and currency.

China’s foreign ministry spokesman Wang Wenbin commented on Pompeo’s Taiwan comment during the Nov. 13 press briefing. He said Pompeo sought to “destroy the U.S.-China relationship and damage the stability of the Taiwan Strait.”

Wang threatened that China would retaliate.

Later that day, the CCP’s mouthpiece newspaper People’s Daily published a commentary on its overseas Chinese-language website, in which it criticized Pompeo with expressive adjectives, saying that Pompeo was “shouting vehemently” and had no credibility. It added that no government listened to him except Taiwan’s ruling party, the Democratic Progressive Party.

The commentary claimed that it represented the voices of all mainland Chinese.

But in past years, several CCP princelings told the Chinese-language Epoch Times in interviews that state-run media represent different factions within the Party, and that they themselves do not necessarily agree with the views expressed in the media.

One CCP princeling in Beijing, who wanted to remain anonymous, said in a phone interview in June 2019 that the Donald Trump administration’s China policy was effective at compelling the Chinese regime to play by the rules.