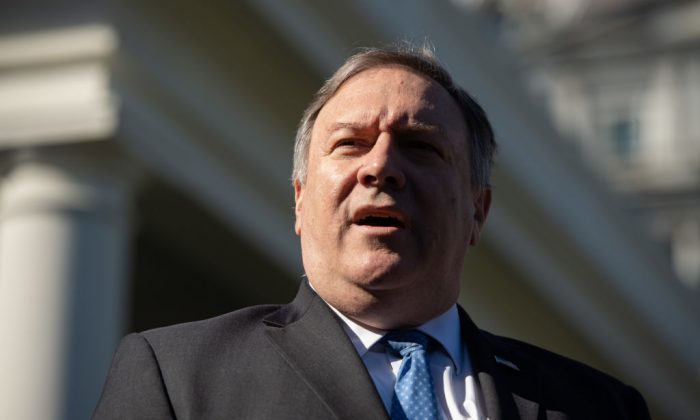 Secretary of State Mike Pompeo speaks to the press about his trip to Saudi Arabia after meeting with US President Donald Trump in the West Wing of the White House in Washington on Oct. 18, 2018. (SAUL LOEB/AFP/Getty Images)
Trump Administration

Secretary of State Mike Pompeo said he spoke with President Donald Trump on Oct. 18 and told him that the United States should give Saudi Arabia more time to finalize their official investigation into the disappearance of journalist Jamal Khashoggi. Meanwhile, the United States has pulled out of a major investment summit in the Saudi capital.

Pompeo told reporters that he had just briefed the president on his visit to Ankara and Riyadh, where both the Saudi and Turkish governments reiterated their commitments to a full investigation.

“We made clear to them that we take this matter very seriously,” Pompeo said. “They assured me that they will conduct a complete and thorough investigation.”

An official deadline on when the Saudis would complete their investigation was not mentioned. Pompeo said both Saudi Arabia and Turkey will complete their reports, which are being done separately, in a “timely fashion.”

“I told President Trump this morning that we ought to give them a few more days to complete that so we can get a complete understanding [of] the facts surrounding that,” he told reporters.

On the same day, Treasury Secretary Steven Mnuchin announced that the United States will be pulling out of an October summit in Saudi Arabia.

“Just met with [Trump] and [Pompeo] and we have decided, I will not be participating in the Future Investment Initiative summit in Saudi Arabia,” Mnuchin wrote on Twitter.

Mnuchin’s withdrawal put the conference’s fate in question. As of Oct. 18, it was still scheduled to proceed. A host of world business leaders have also pulled out, including London Stock Exchange Chief Executive David Schwimmer and the CEOs of HSBC Bank, Standard Chartered, Credit Suisse, and BNP Paribas.

Khashoggi, a U.S. resident, was allegedly last seen on Oct. 2 entering the Saudi consulate in Istanbul. Turkish officials and media outlets citing unidentified sources allege that the 59-year-old Washington Post contributor was murdered inside the consulate.

Saudi Arabia has strongly denied all such reports. The Epoch Times could not independently verify the anonymous claims.

Khashoggi had entered the consulate at the time to get documents for his upcoming marriage. During an earlier press briefing in Belgium, Pompeo said he had a chance to speak to Khashoggi’s fiance. He did not disclose what they discussed to reporters.

The White House so far has chosen not to accept either Turkey’s or Saudi Arabia’s claims. Both countries share an extended, bitter rivalry. The United States has had a strategic relationship with the Kingdom of Saudi Arabia dating back to 1932.

During Pompeo’s visit, Turkish President Recep Tayyip Erdogan assured him that they would share the results from their investigation with the Saudis as well.

“We do believe that between these two efforts, a complete picture will emerge of what actually transpired here. And we’re working towards that, we’re looking forward to that,” Pompeo told reporters.

Turkey claimed that they had obtained audio and video evidence of Khashoggi’s fate, but they have not shared any of the alleged material with the U.S. government or key European allies, Reuters reported.

Trump appeared to confirm the lack of evidence when he said on Oct. 17 that the United States had asked Turkey for any audio or video evidence it may have related to Khashoggi.

“We have asked for it, if it exists. … I’m not sure yet that it exists, probably does, possibly does,” Trump said Oct. 17.

During the short briefing, Pompeo responded to concerns that the Saudis could not be trusted to conduct a fair and impartial investigation.

“We’re all going to get to see the response from Saudi Arabia to this. … All of us will get a chance to make a determination as to the credibility of the work that went into that, whether it’s truly accurate, fair, and transparent in the very way they made a personal commitment to me, and ultimately made a personal commitment to the president when they spoke to him,” he told reporters.

In Istanbul, Turkish investigators for a second time searched the Saudi consulate, where Khashoggi vanished, in a hunt for clues. They left the consulate early Oct. 18 after searching the building and consular vehicles, a Reuters witness said. They used bright lights to illuminate the garden.

Earlier, they spent nearly nine hours in the Saudi consul’s residence along with Saudi investigators. The Turkish search, which used a drone, included the roof and garage.